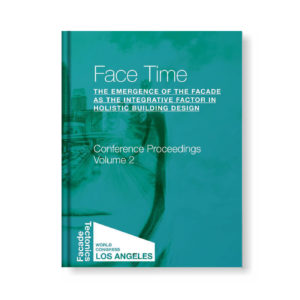 The Facade Tectonics Institute is an international member organization with the mission of carrying out progressive and broad-based research in building facade technology. The intent is to catalyze and foster a deep dialogue of collaborative research activity that bridges the fragmented market segments of the building industry, pairing industry, government, academia, the profession, and ownership.

The 2016 Annual Conference and inaugural World Congress focused on issues of facades for both professionals and academics while featuring blind peer reviewed papers with both new research and case studies. It combined the art, science, and technology of the building skin with an unparalleled networking opportunity from the domestic and international building community. As we had reached such a level of enthusiasm and participation that we have outgrown our on-campus facilities; the conference was held in a high-profile venue in downtown Los Angeles, October 10-11th.

ABSTRACT
This paper provides information about an in-house research project for shadow box design. During this research project, several mockups with sensors for heat and relative humidity were produced and tested under two different laboratory conditions: one with artificial sunlight and one in an outdoor temperate climate.
The outdoor test provided information about temperature changes in the shadow box due to air infiltration and exfiltration.
Further, it also provided information about the conservation of solar energy in the air cavity behind the spandrel glass and adjacent materials. Temperature sensors on the interior surfaces of the façade produced data that was used to draw conclusions about the heat flow from inside the shadow box to the interior ambient air via the façade profiles. It was also used to develop a two-dimensional simulation tool to show heat development and heat flow in the shadow box.
The test under laboratory conditions with artificial sunlight showed that the correct choice of glass type and color of the opaque back layer highly influences heat development in the shadow box cavity. The test results also illustrate that the size of ventilation openings and the depth of the air layer only slightly influence heat built-up in this cavity.
The shadow box is a very complex system that should be designed and manufactured so as not to have a detrimental effect on the thermal performance of the facade. To maintain precise and consistent reproduction and to improve the thermal performance, a new PVC shadow box profile was developed. PVC is a poor thermal conductor and, therefore, the heat flow from the shadow box construction into the interior becomes interrupted, consequently improving the heat transfer coefficients of the façade and the panel construction. Furthermore, the PVC profile has been designed as a four sided mitered and sealed frame insert to enable easy attachment of the opaque back layer, thus creating a weather tight assembly within the curtain wall day light opening.