The cross-referenced series of lectures and seminars „Digital Crafting“ at the professorship of CAAD at the Detmold School of Architecture and Interior Architecture is mainly about dynamics, changeability and adaptivity in architectural design. Hereby the focus of the development, presentation and realization of architecture lies on the one hand on the architectural presentation and visualization and on the other hand on the iterative development which we know from the software development, a circular metamorphosis in the sense of making design and architecture instead of just ‘drawing’ a plan. In this context students develop 1:1 installations at the intersection of digital tools and methods and integrating material properties and behavior in a digitally driven   development and design process. On the foundation of 3 sub-tasks, the students were guided by the core themes of computational architectural design, using various digital techniques in the following areas:

The Burning Man Festival provides an enormous range of inspiration to create interactive installations, architecture, objects or vehicles. Unlike at a museum where works are usually just exhibited and ought not to be touched, ‘Burning Man’ forms a huge interactive playground.

In the project ‘Liquid Space‘ the students developed a comprehensive concept and prototype of an interactive, kinetic, mobile or adaptive installation. This experimental project should be based on the exploration of (open) digital tools, software (plugins) or new materials and techniques in order to design, develop and generate a functional prototype of such dynamic installation.

The project consists of a 12-diameter reflective, metallic dome with protruding pipes that stem from the center point, enabling viewers to view all the surrounding in separate frames. In this project, the natural context of Black Rock Desert is the conceptual focal point of the project with the installation maximizing view in a 360 fashion when the user is standing in the middle of the dome. In order to achieve the qualitative aspect of contemplation in this project, there is no artificial light used inside the dome, allowing sunlight to come through hundreds of holes and giving viewers a unique and different experience of Black Rock Desert. Reflective shiny metal sheet is chosen as the only material used in the whole project to not only maximize the sunlight coming through pipes inside the dome, but also to reflect the natural surroundings from outside. 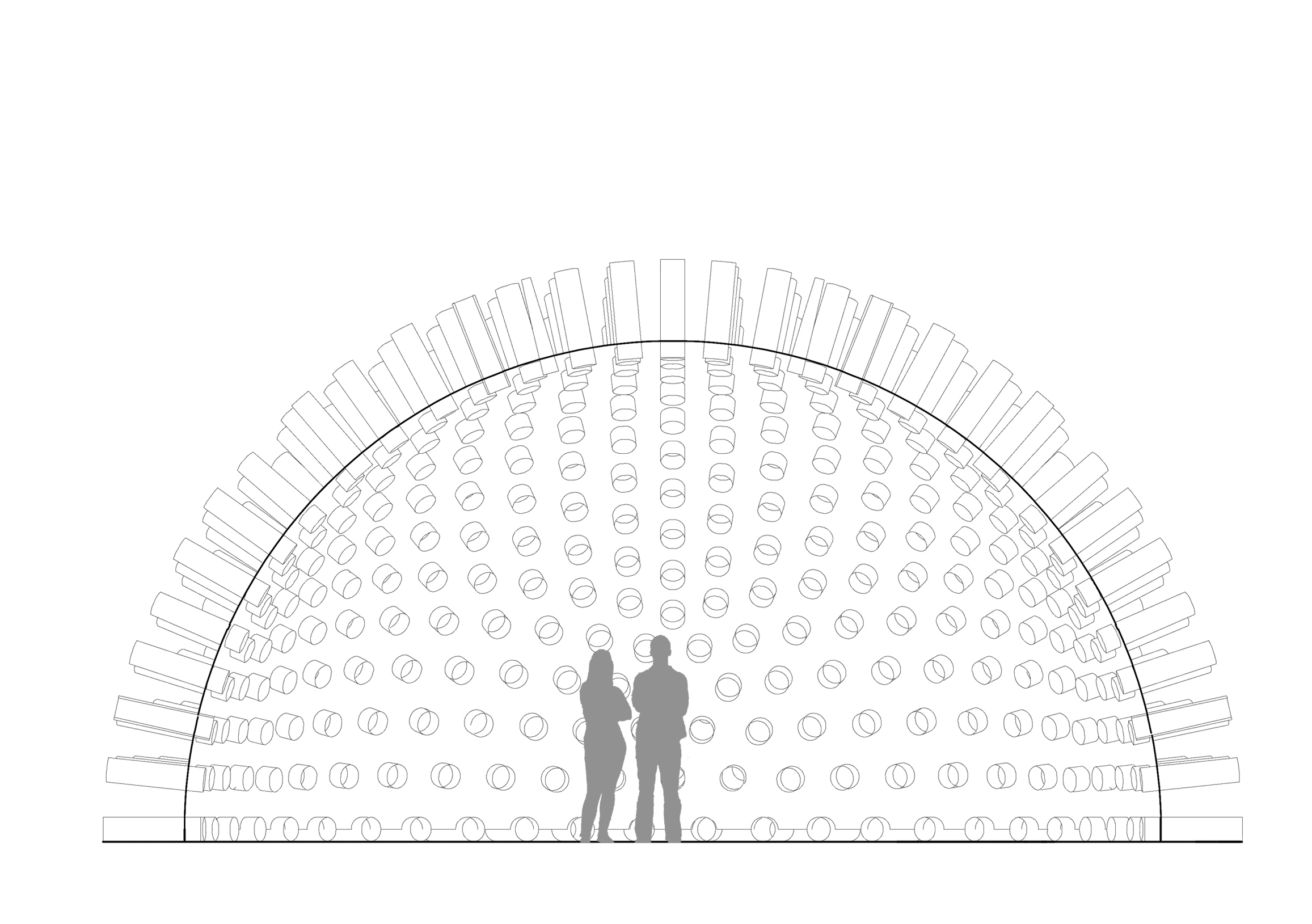 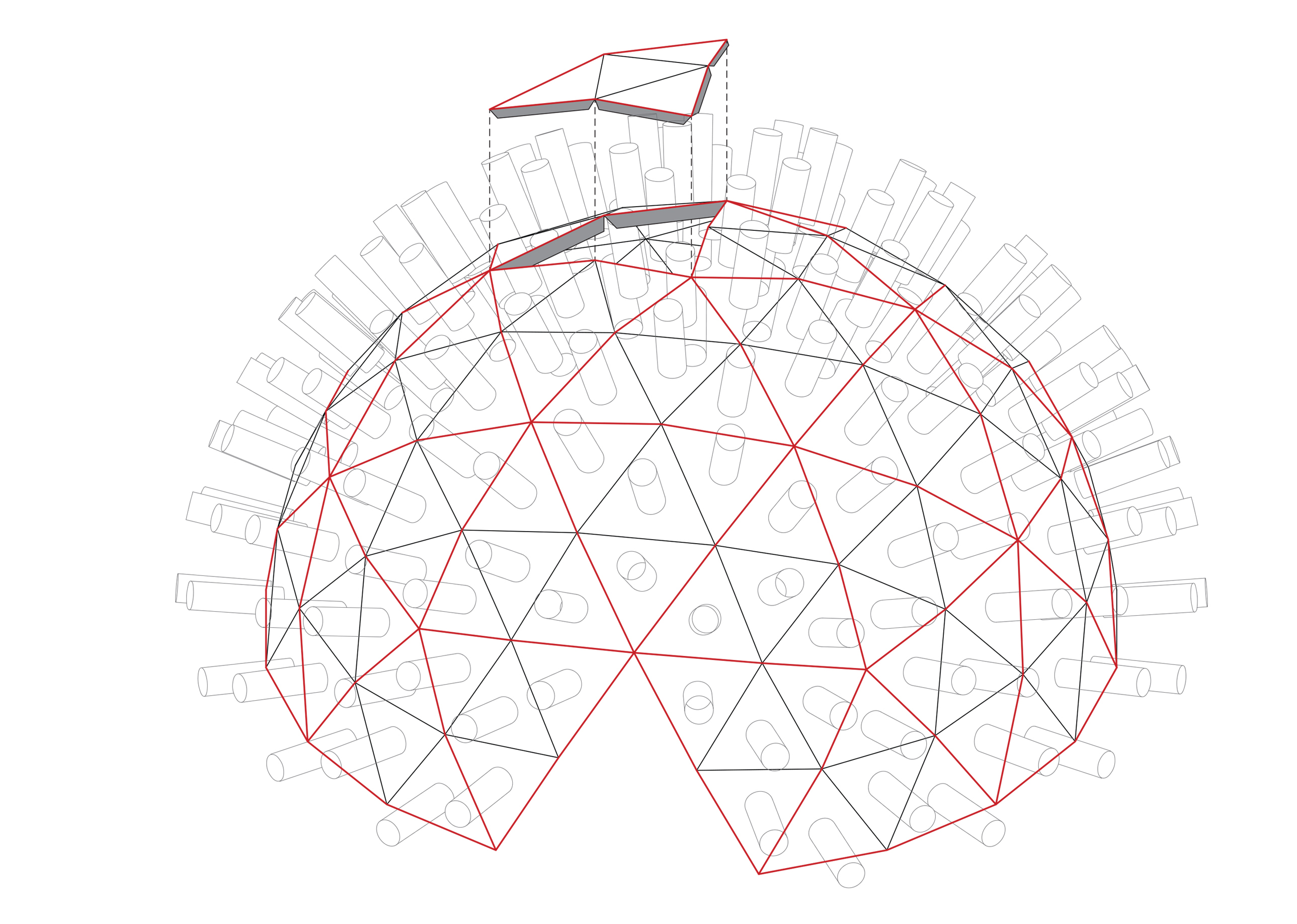 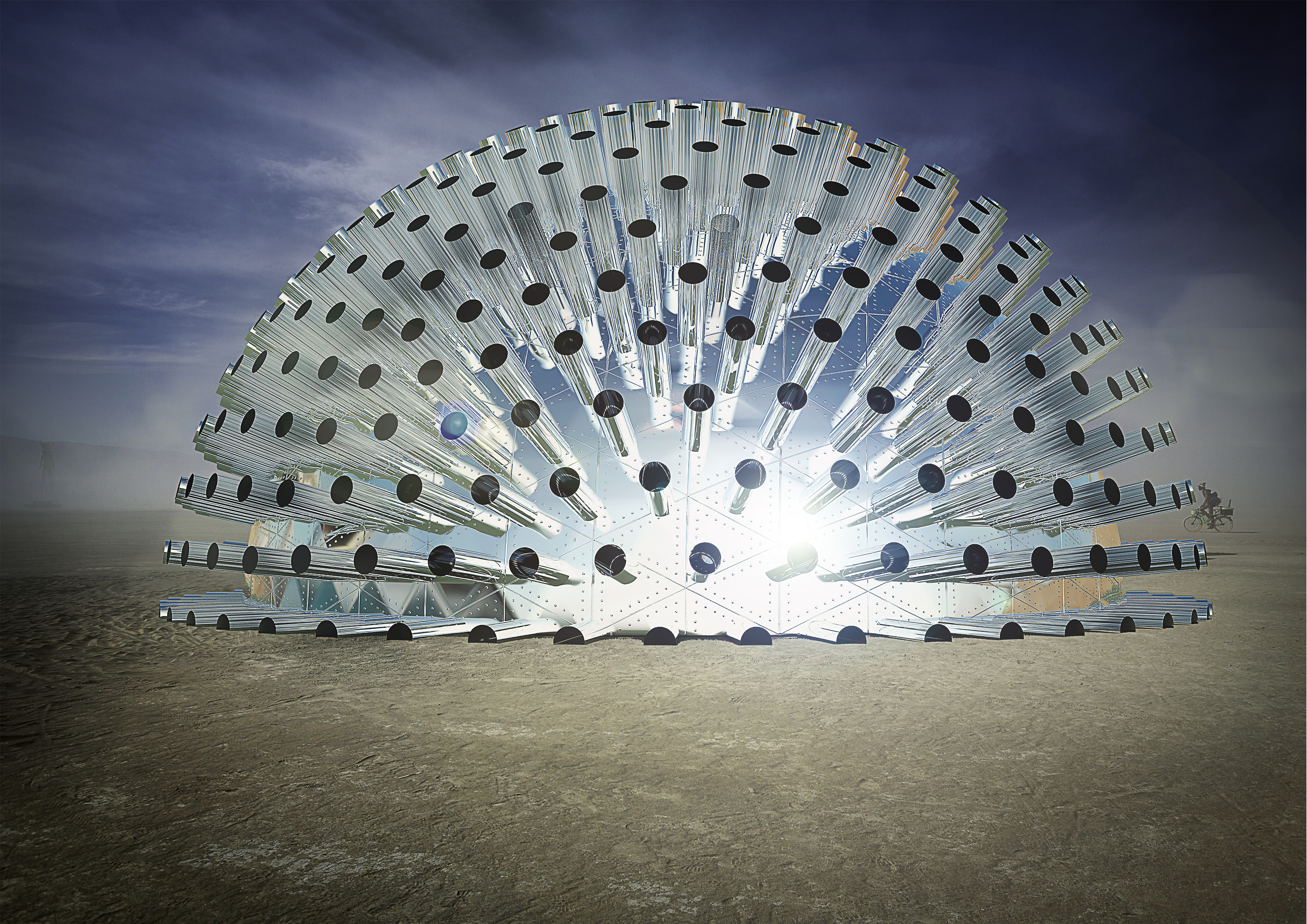 A WELL OF DESIRES

Childhood is the most cherished phase of everyone‘s life, it is time of innocence, creativitiy and intuition . The main idea is to make everyone remember the games that they used to play and relive their childhood again. It is inspired by a well know childhood game, which is the see saw, where people will bounce each other on a roof hammock mesh, supported by a well-like structure made of bamboo.  The dream catcher will help them to have faith, as it is the representation of sun and the circle of life, covered with the spider web to filters the bad dreams. 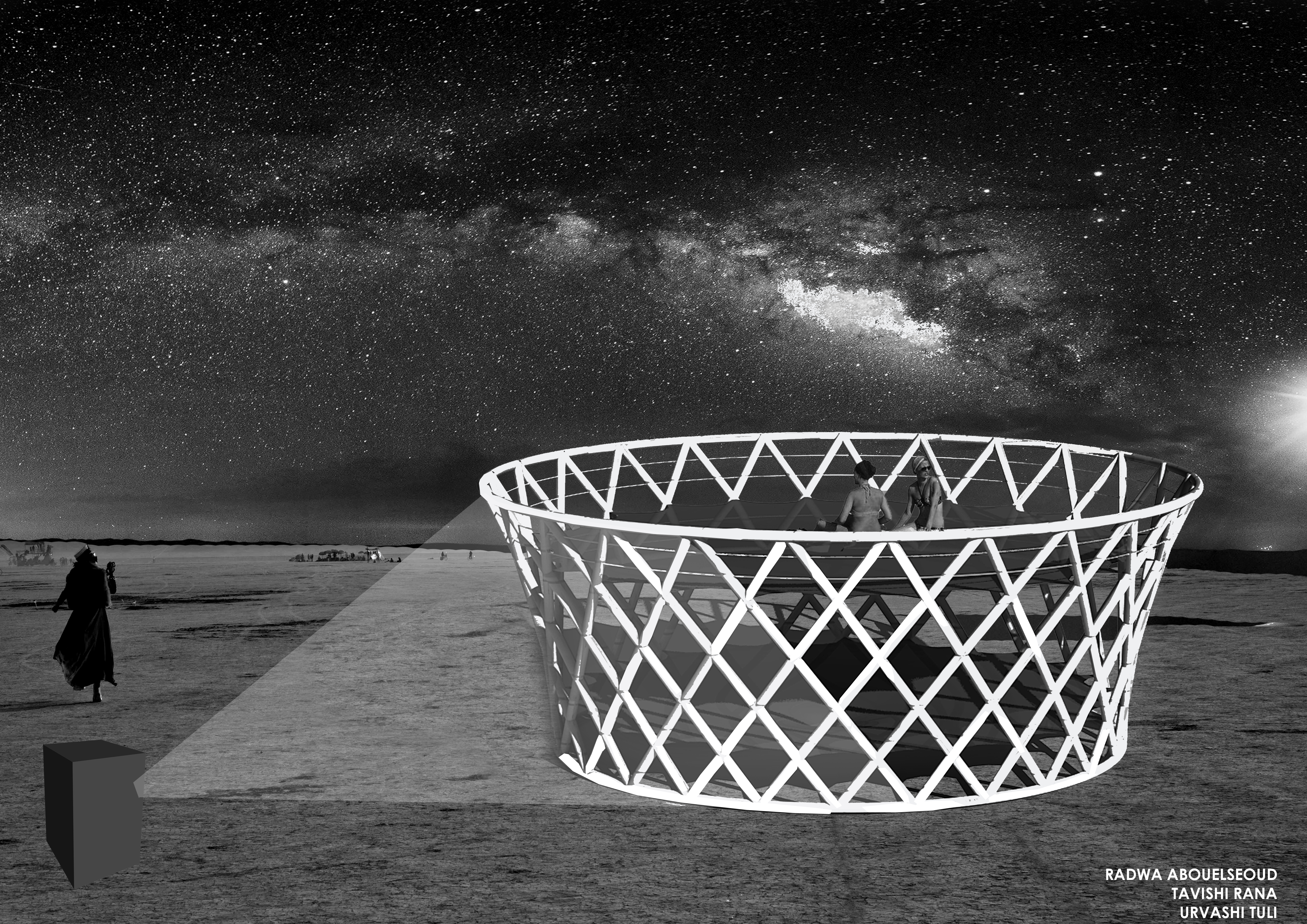 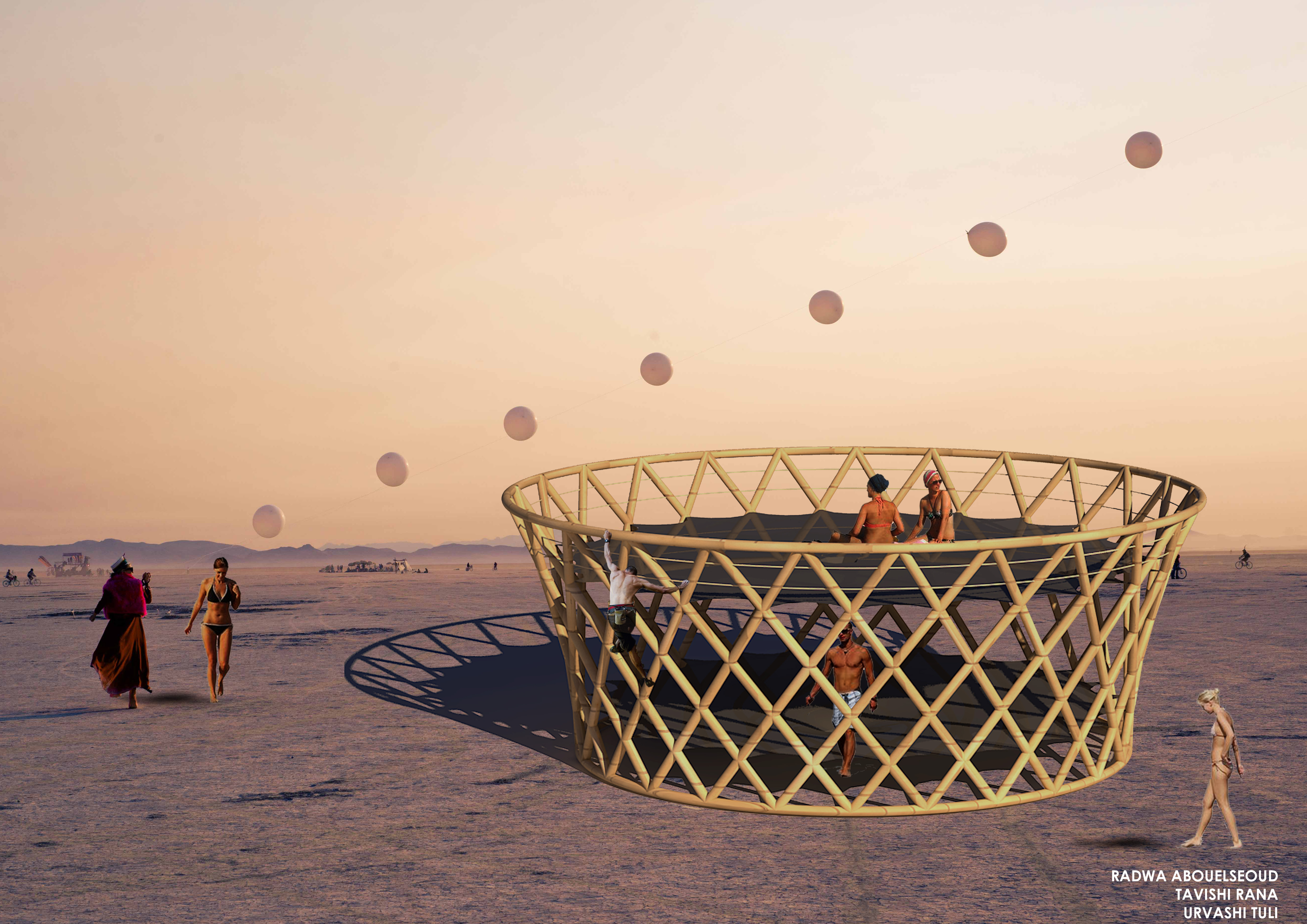 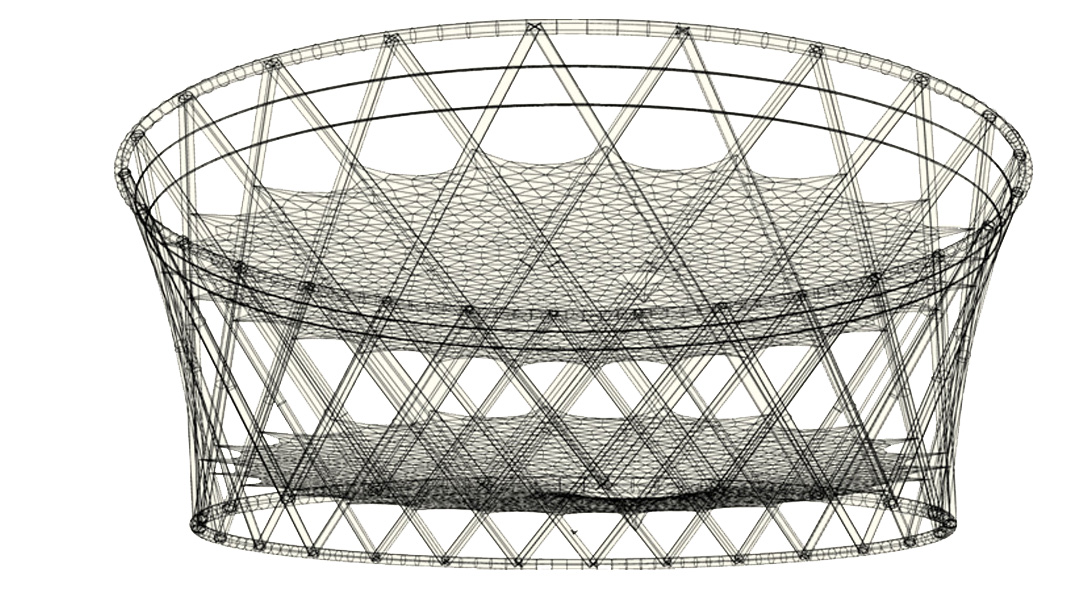 N-A-G-A is an interactive sculpture that aims to interconnect tree of the main elements of nature Earth, Wind, And Fire. This connection is made not only by the physical aspect of the sculpture but also by the symbolic and metaphorical concept embedded in the shape and its function.

Different sizes of openings go through the curved shape. This openings are meant to interact with the wind. Thanks to the different angles of the form the wind will produce different sounds when collides with the claddings. When it burnt, the sinuous shape will draw a line of fire on the landscape. This interaction will serve to connect the piece to its final element, the fire. 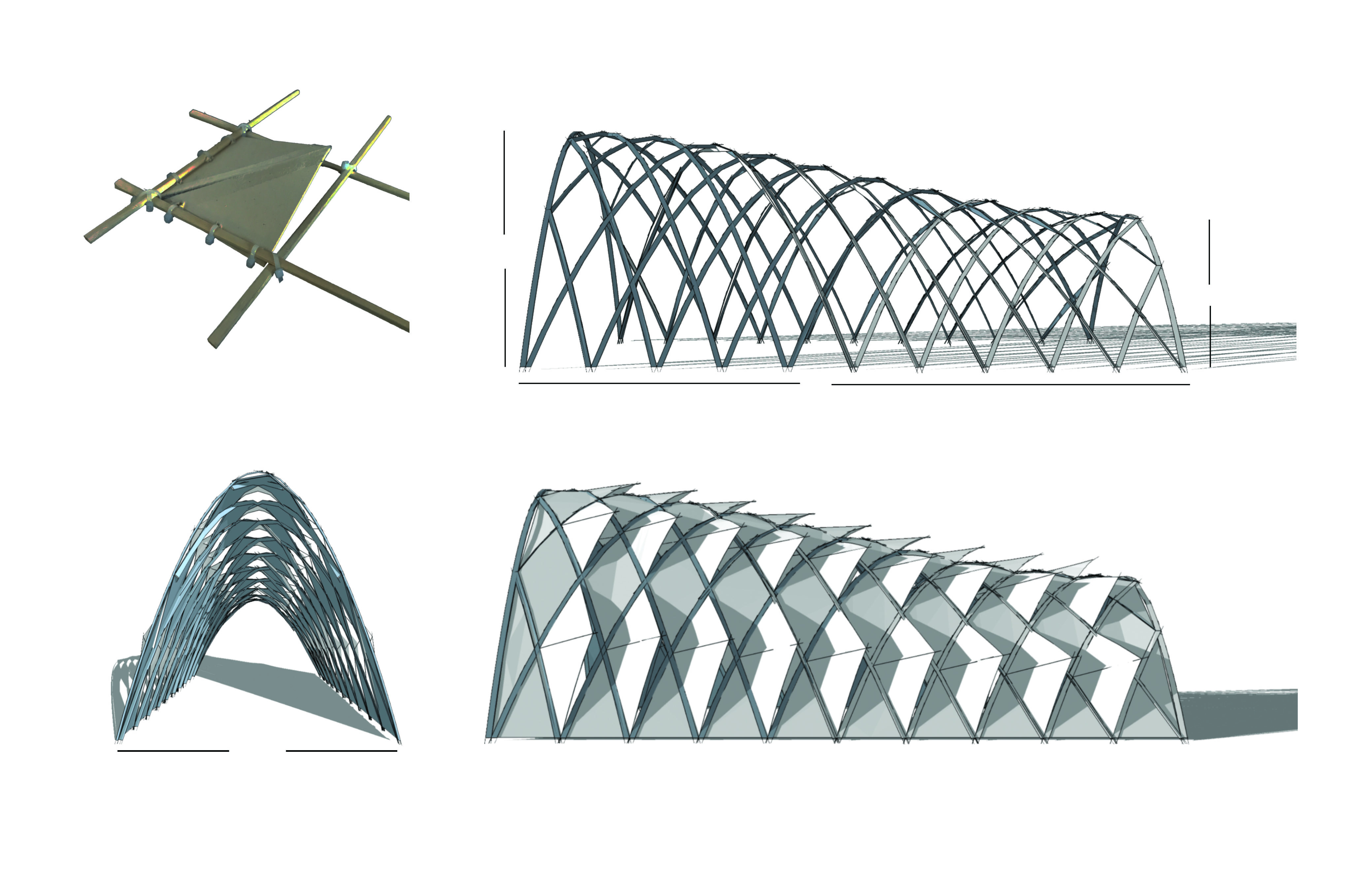 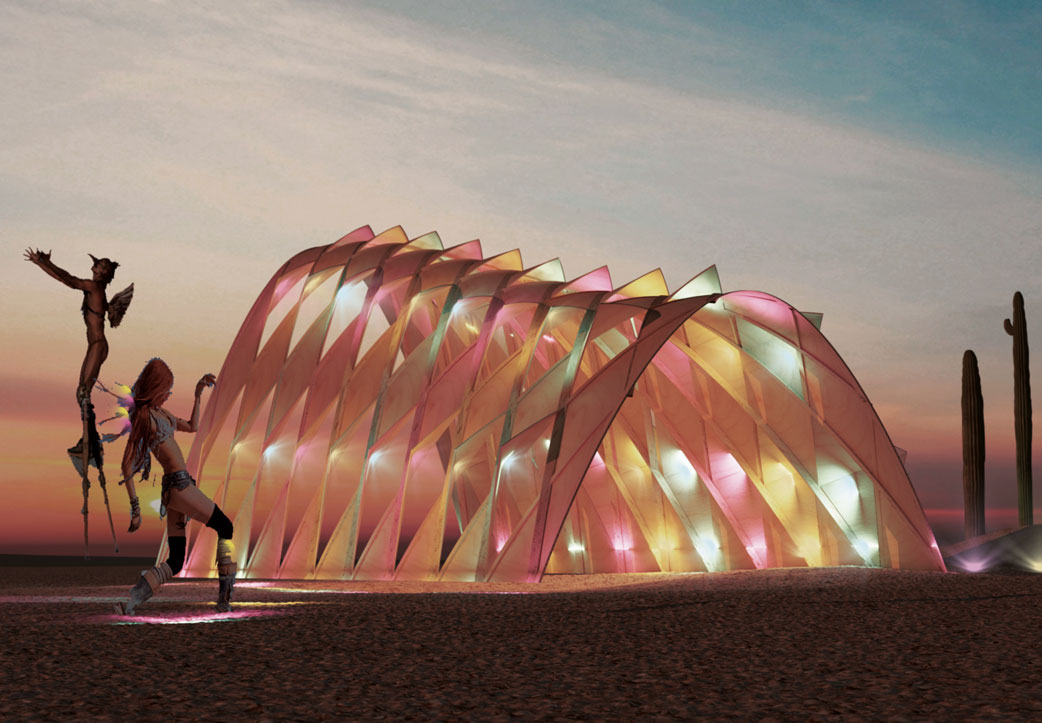 As the name suggests, the Perception sculpture is about different visions. Thirty-two circularly arranged disks form the shape of a head. What is special about this is, however, the volume drawn inside. Through a movement of the viewer the sliced windows overlap and similar to the moiré effect changes the perception of the sculpture. Supported by color lights, therefore, a different interaction with the viewer arises from each location. Everyone sees the same sculpture, so the same head, but nevertheless everyone has a completely different, individual view. Tiny changes in one‘s own location change the entire perception. 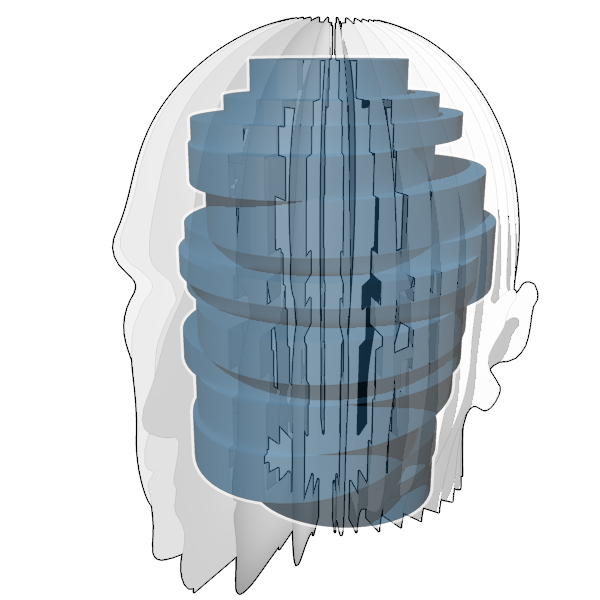 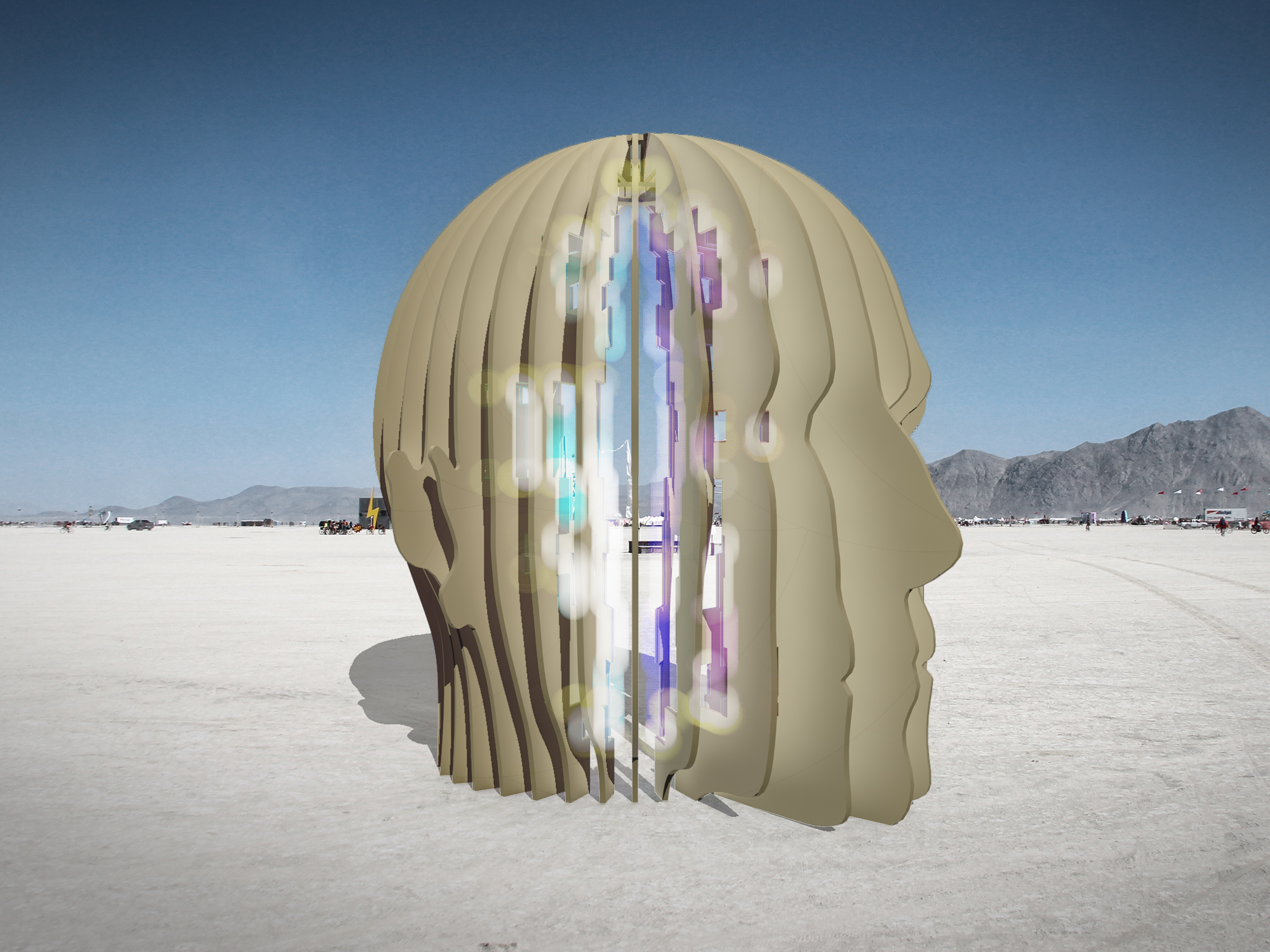 The basis for this concept is the elaboration of the „The other way around“ project, in which a three-element plug-in system is an interactive sphere. Through self developed, digitally fabricated wood connections and light installations, the design was further developed and refined, so that a section of the ball as a prototype was built on a scale of 1: 1. The lighting installation consists of individual LED light strips arranged on both sides along the steps. Through interaction, the motion sensor triggers the light. Depending on the desired effect of the light play, the interval duration of the lights can be varied by means of the following circuit diagram. In addition to the luminaires, which must have both the light source and a motion detector, an additional battery and a mono functional time relay are required. 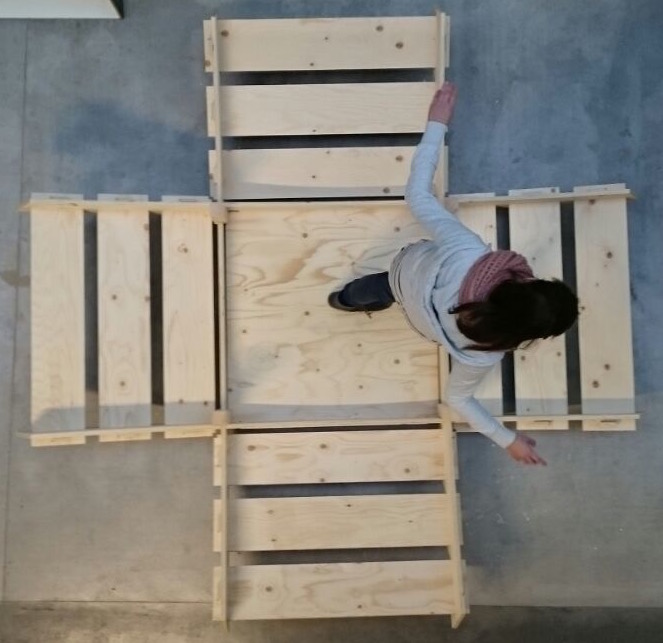 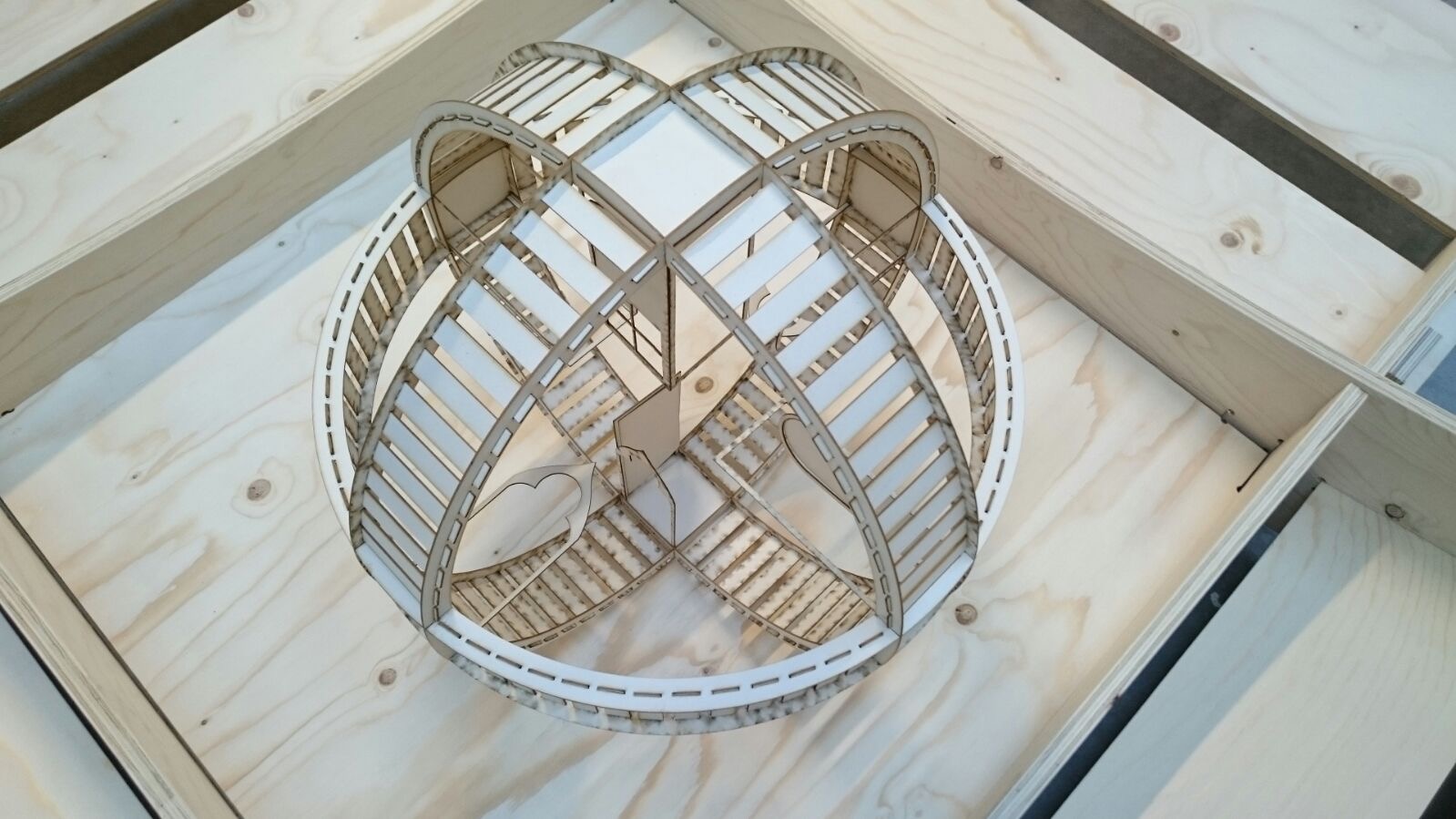 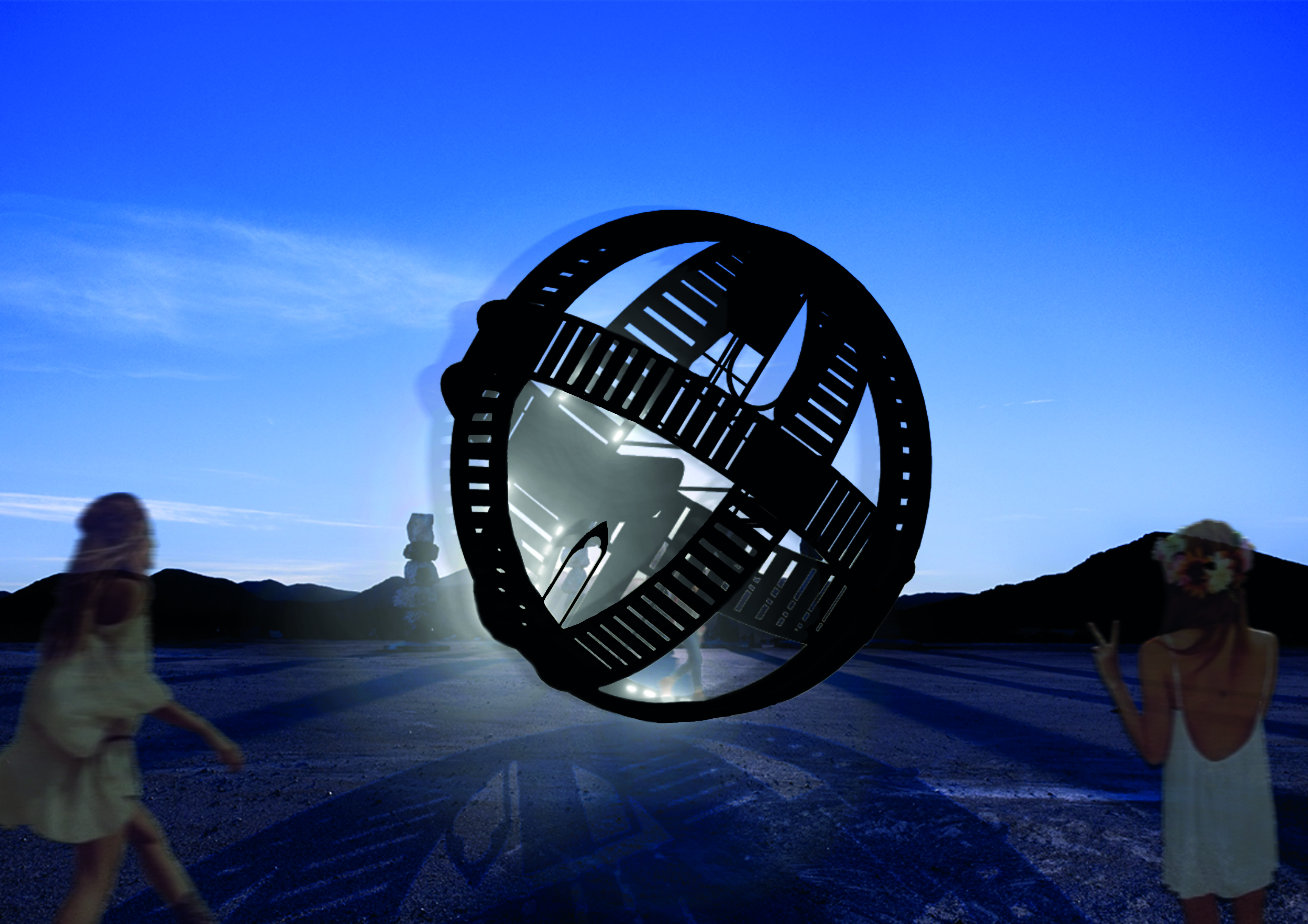 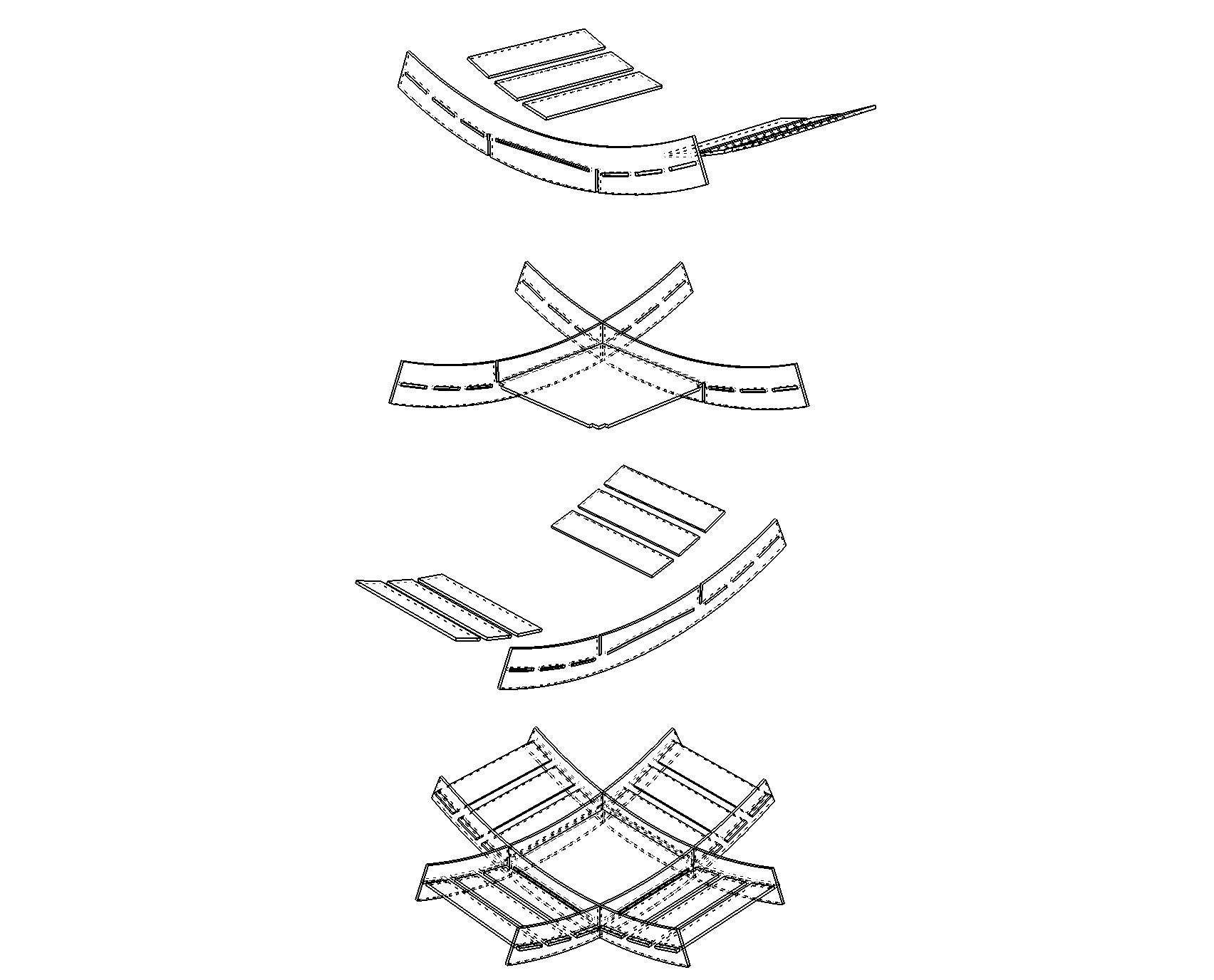 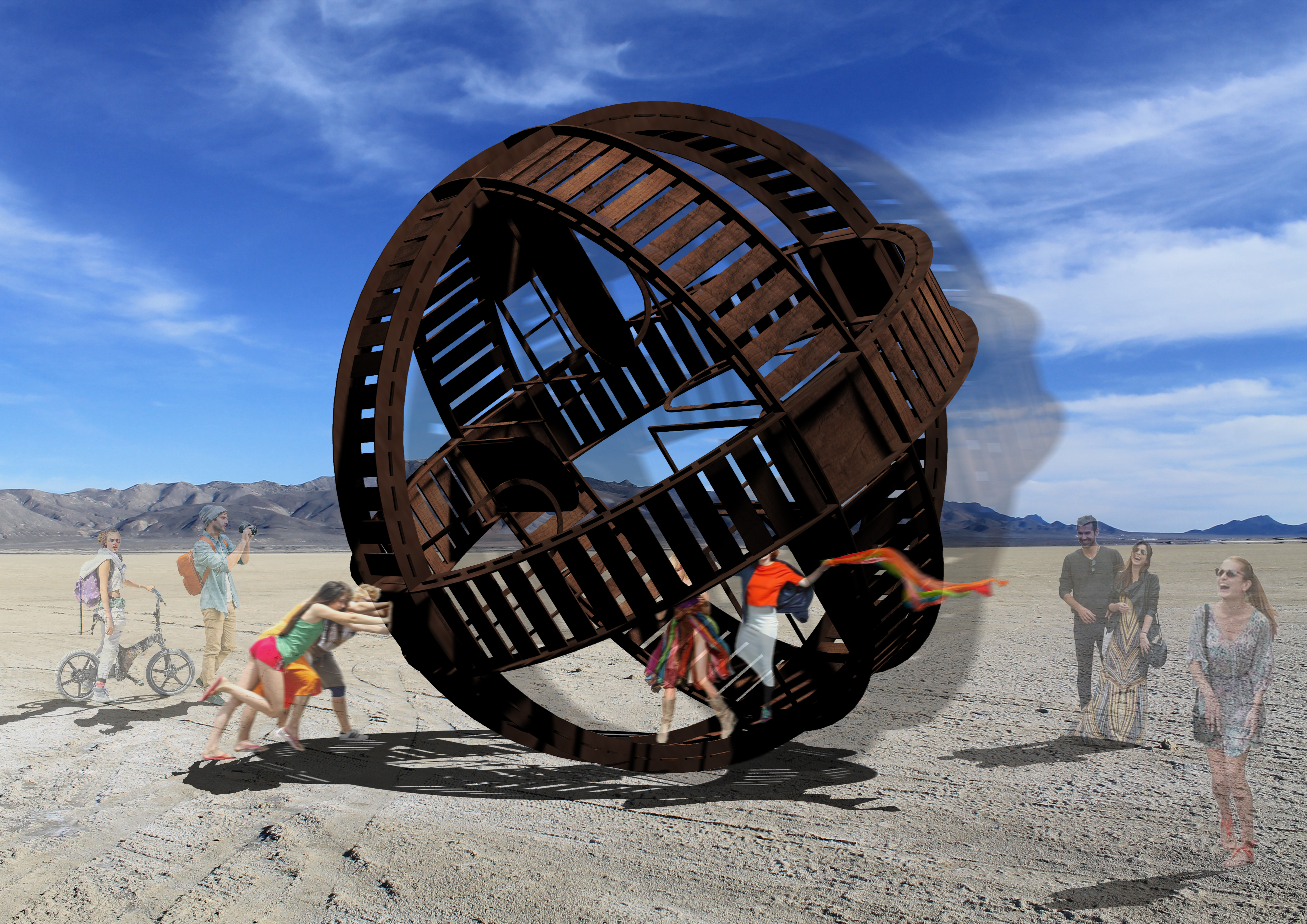 The project for the Burning Man 2017 is a special place of rest and meditation. The festival visitors can come to rest and recharge energy in a short time. The PeaceGlobe is a sphere that houses a meditation site inside. The interior comprises pillows, mats and stools and a second level, which is accessible via ladders. The outer structure consists of irregularly distributed circles, which have internal openable elements. These are working like shutters and are reminiscent of an iris. This concept is inspired by the facade of the Institute du monde Arabe by Jean Nouvel. The PeaceGlobe is to make sure that the senses of the visitors are getting receptive again. In order to be able to go more intense to the many influences from the sourrounding creative installations in the environment, visitors are offered an installation in which they can meditate. During the day, the number of visitors de termines the opened elements in the outer shell of the installation. Each shutter is provided with a sensor which causes the opening of the element when someone is sitting nearby. The closer you get to it the more the shutters will open. The sensors are sensitive from a distance of two meters. During the night the area of the opened shutters will be illuminated additionally. The closer you get to the sensor of a shutter the lighter the illumination will be. The sphere is an infinite surface without corners and edges. In this context, this is intended to illustrate the infinite possibilities of the forms of meditation and faith. 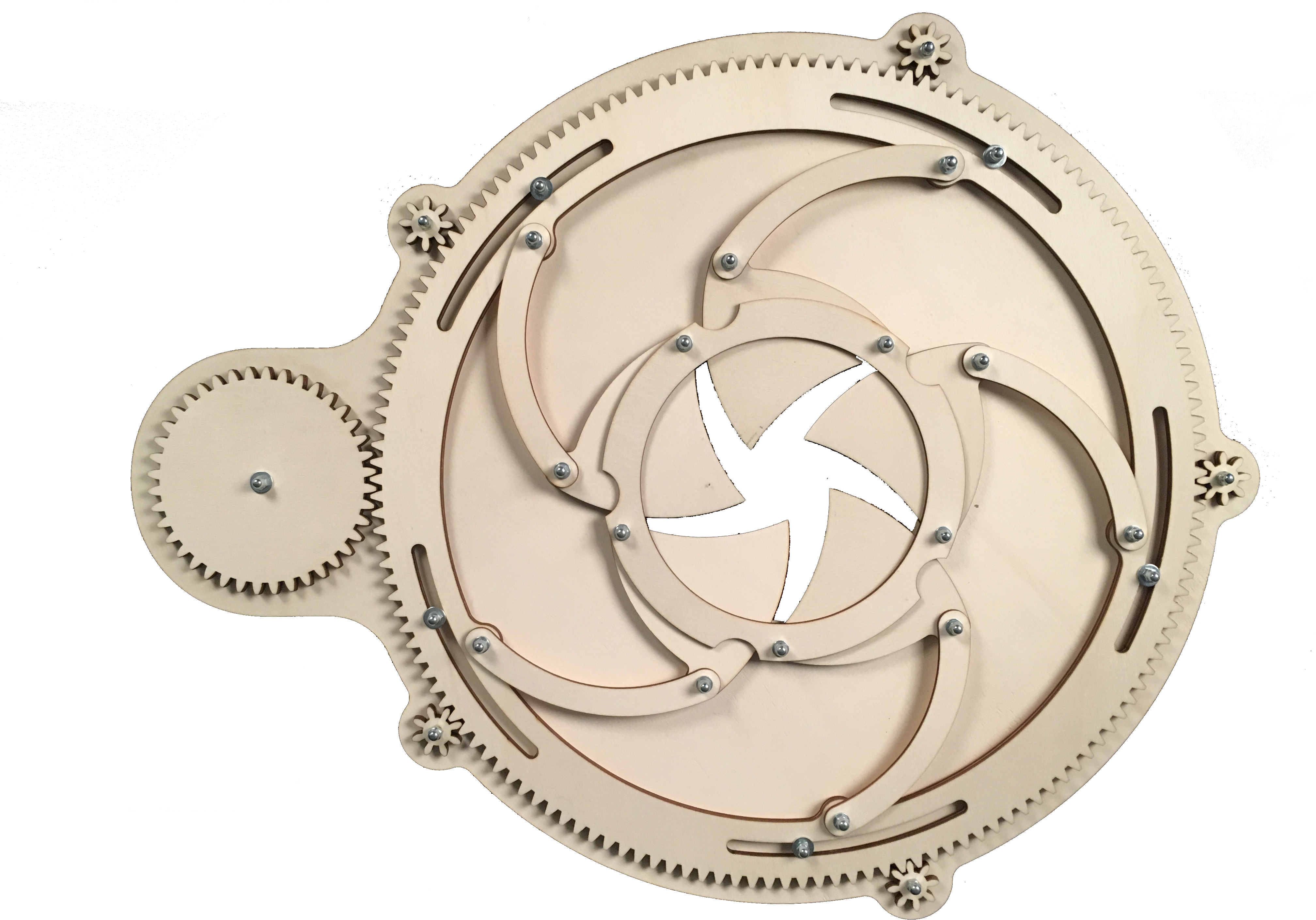 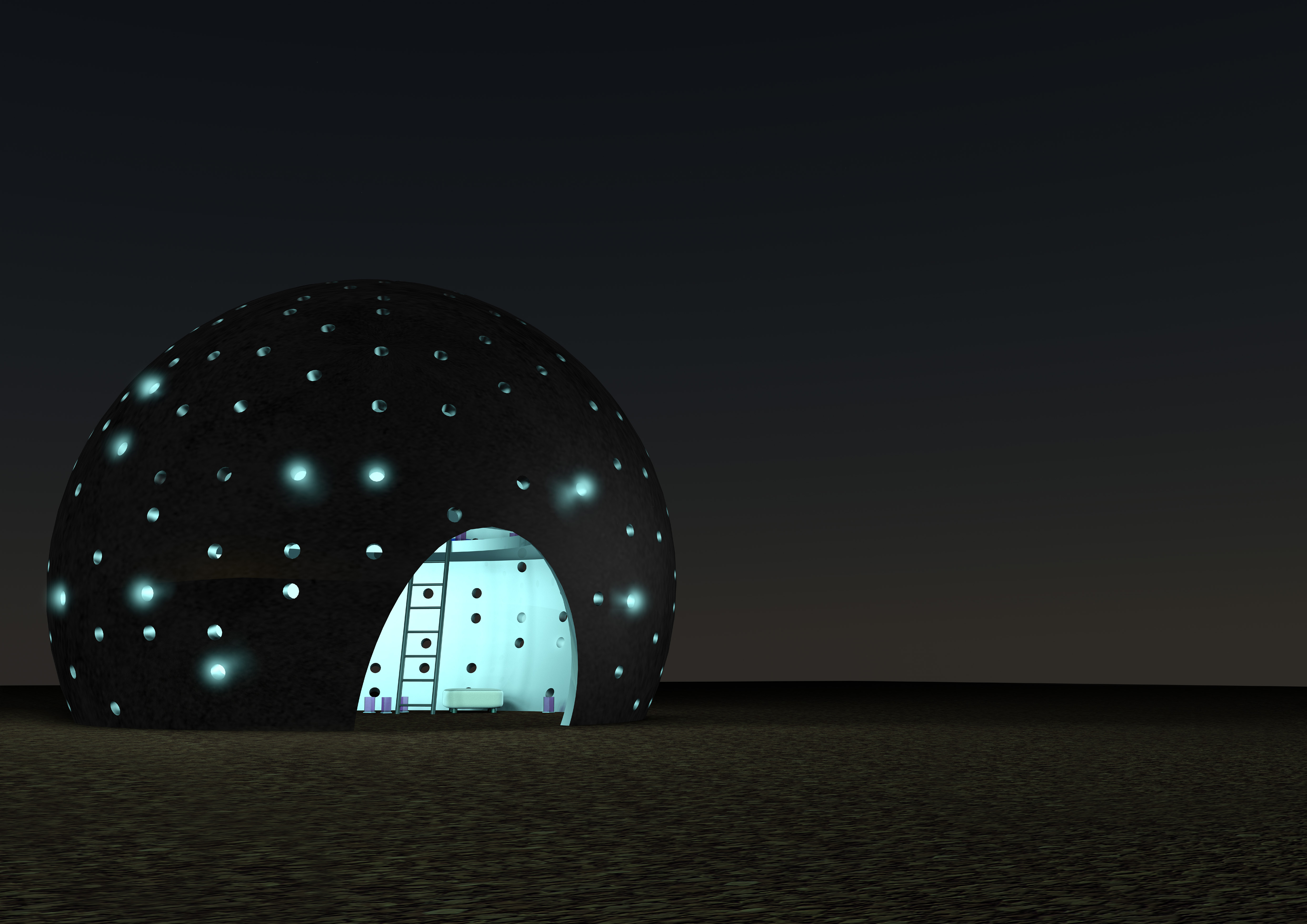 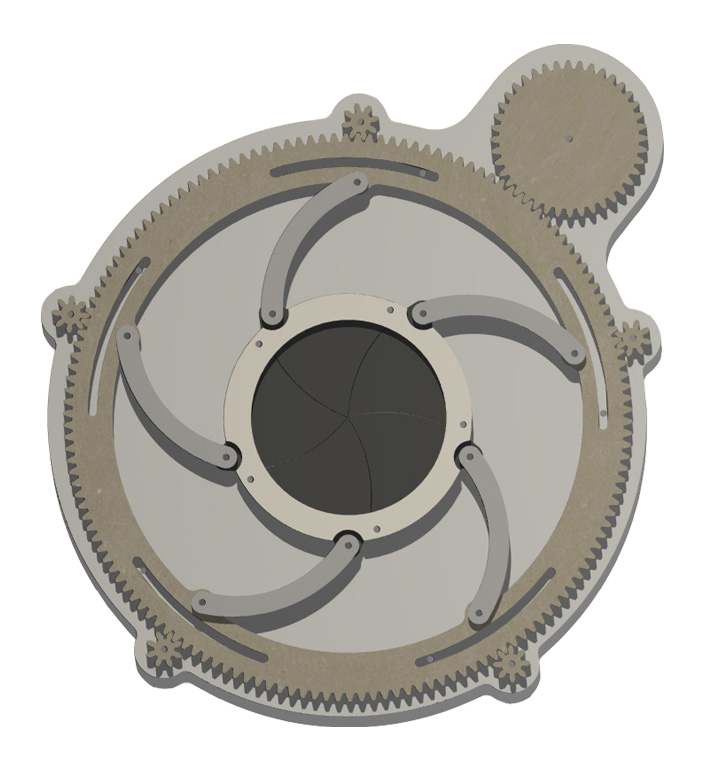 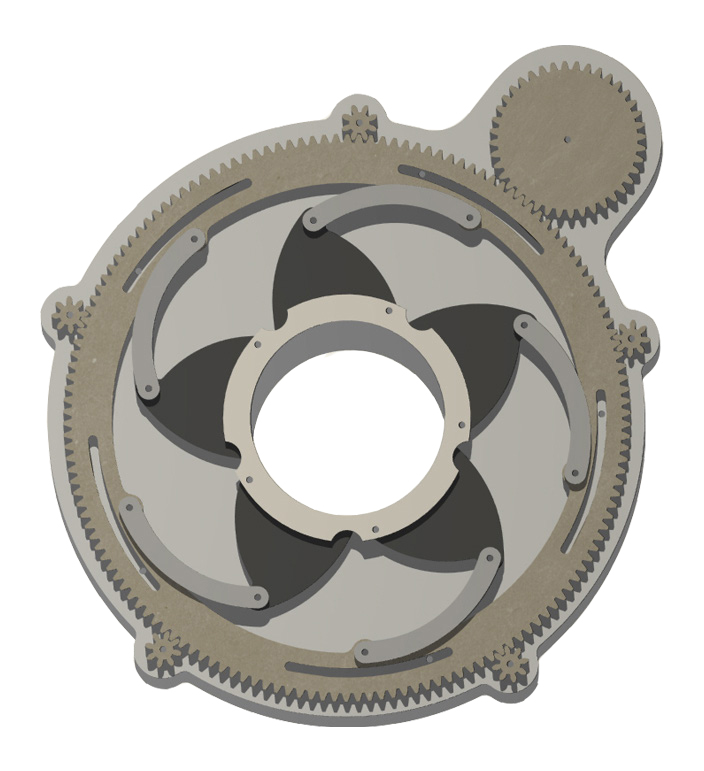 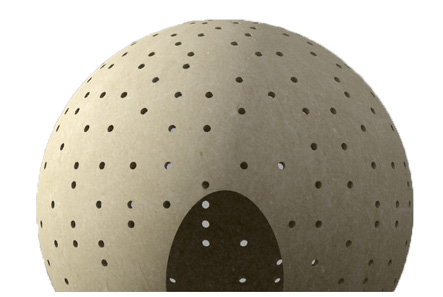 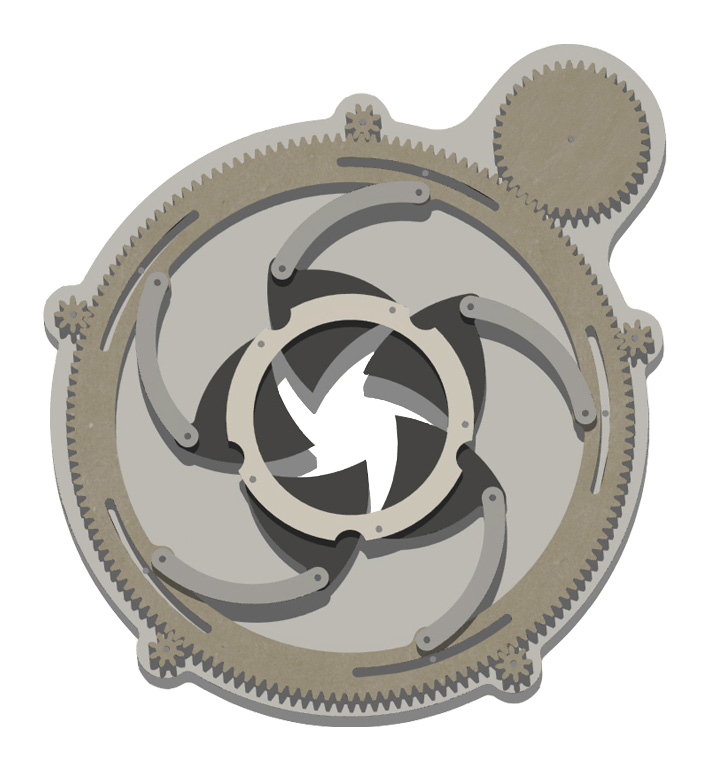 Kairós: it is a turning point, a special occasion. Kairós represents that exciting moment when everything changes, orders that transform the stagnant in movement, and that give rise to a new day and a new situation. The installation is act like a maze, in collide with 3 meters – deformable walls, the spectators allow to explore and form thier own shape of walls. The pattern of the walls play with voronoi pattern work with elastic panel material, to create deformable effect, yet still static. The pattern of voronoi also create the effect of illusion, by light and shadow. In day time, the shadow will change by the sun light, in night time the shadow change by artificial lighting and movement of the participants. The installation provide the perception of space and time, which can be changed all the time, by physical or light. The panel system hang with the steel frame, which are attached to the ground. Plan of the installation create by grasshopper definition, to create spiral element and shape. Also the pattern of each panels are different, depend on the length and height. Design concept is to create ‘Dynamic Installation’ with algorithmic modeling. From plan with spiral grasshopper definition to the element of each panels create by voronoi. Each panels has unique component depend on dimension and angle. In term of design, the installation is adaptable to different size, number and diameter of planning. Also it can be change the form of shape, by physical way, by push or pull force by participants, causing by resistance of material. 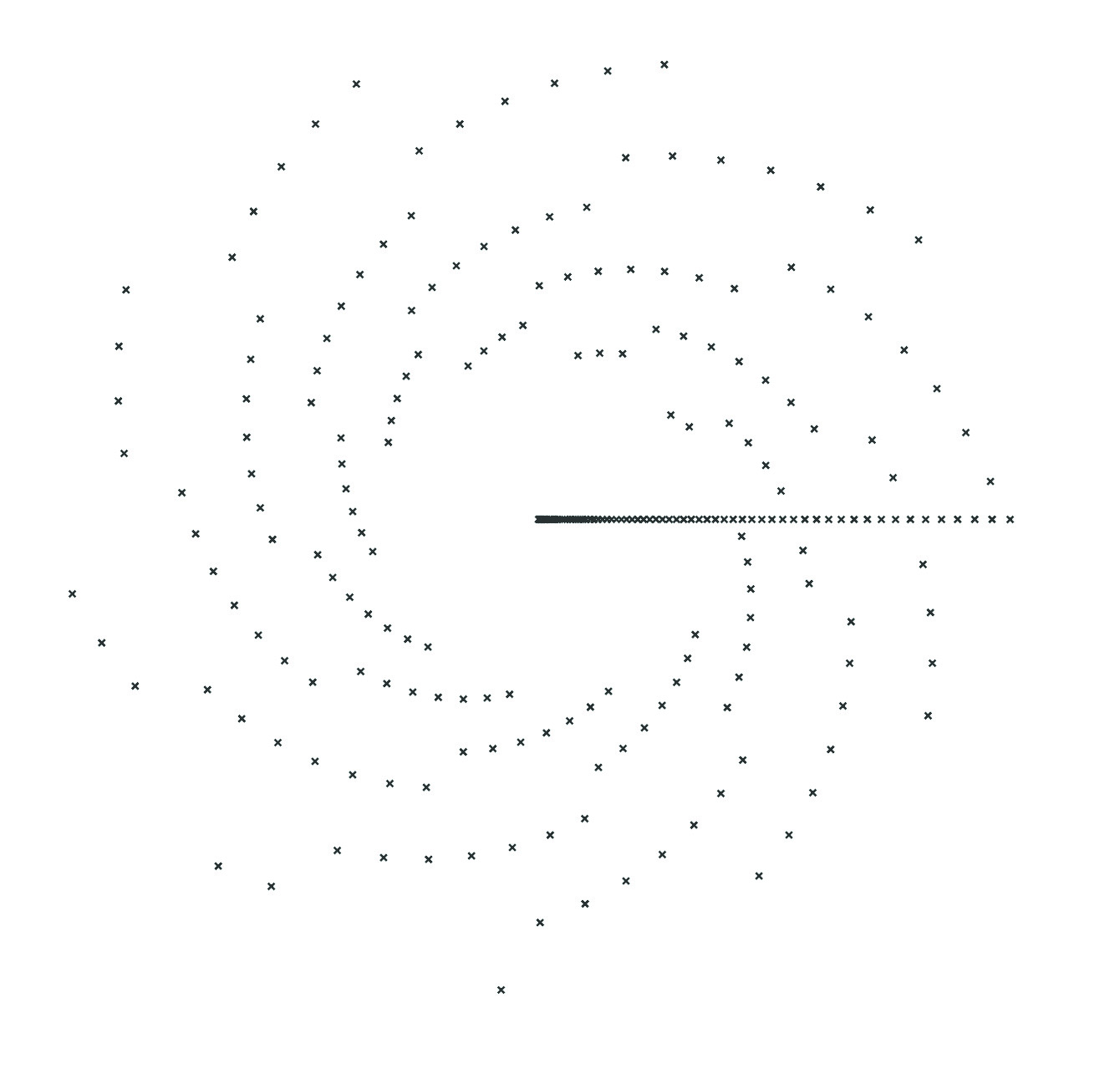 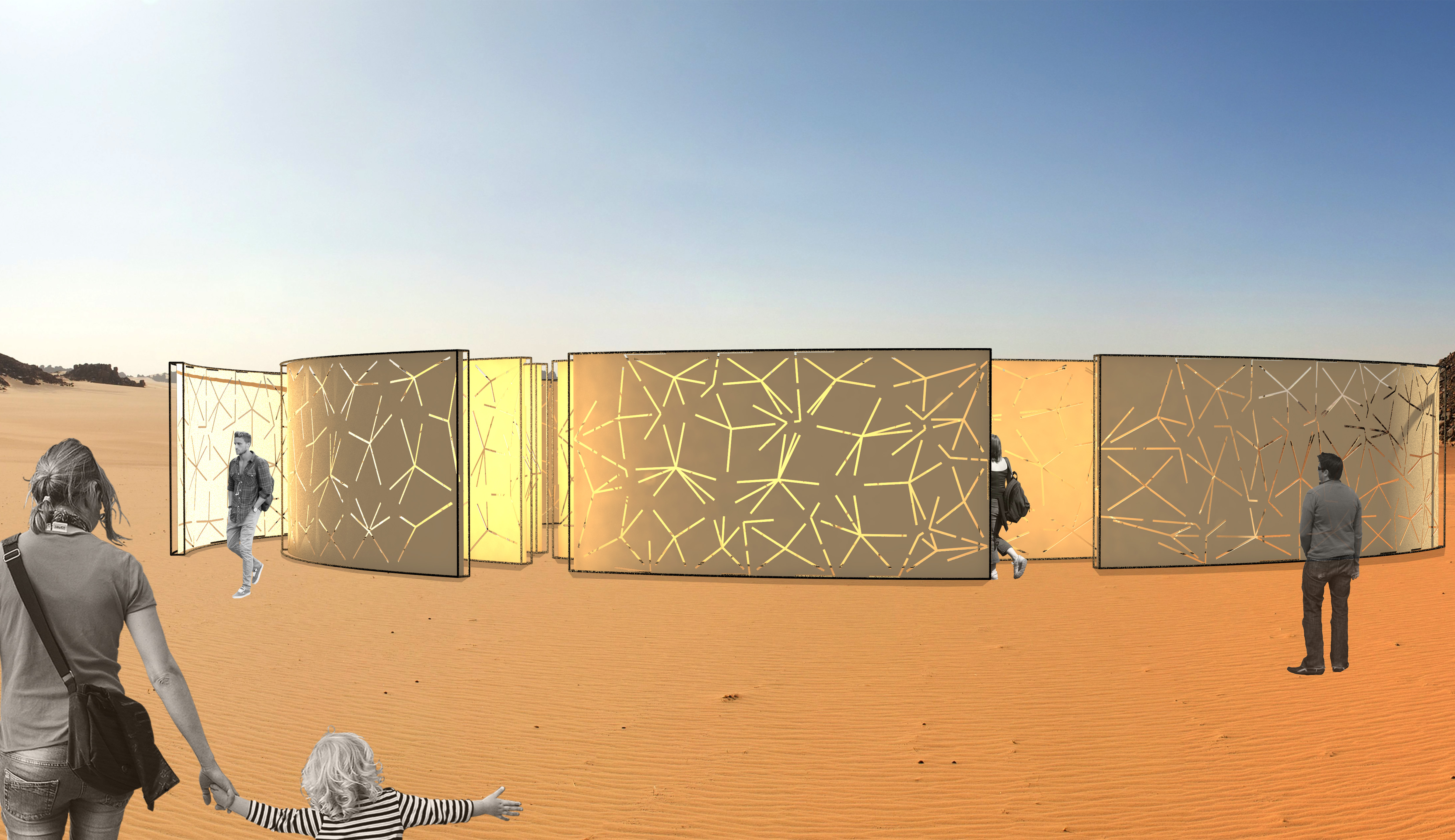 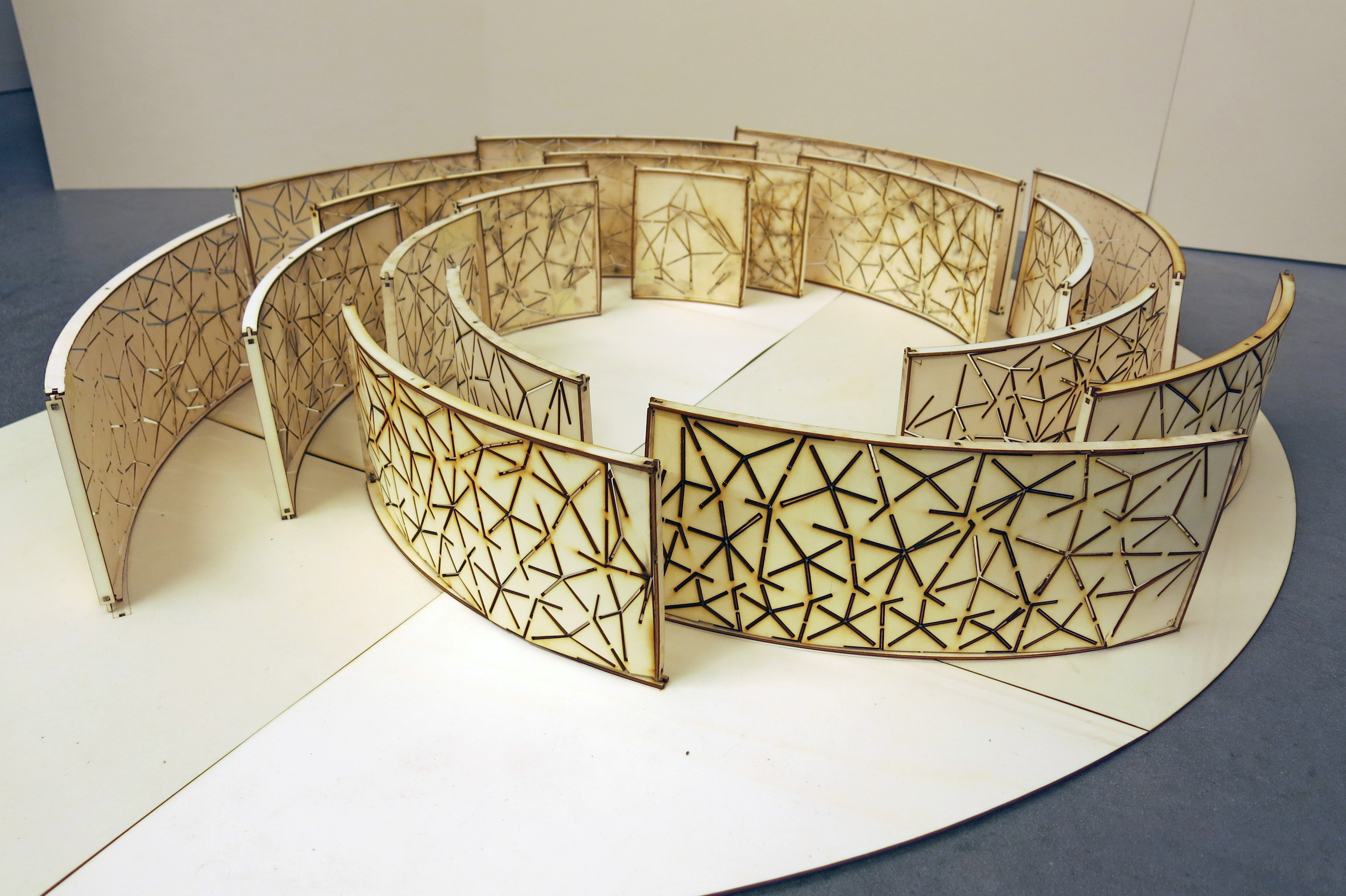 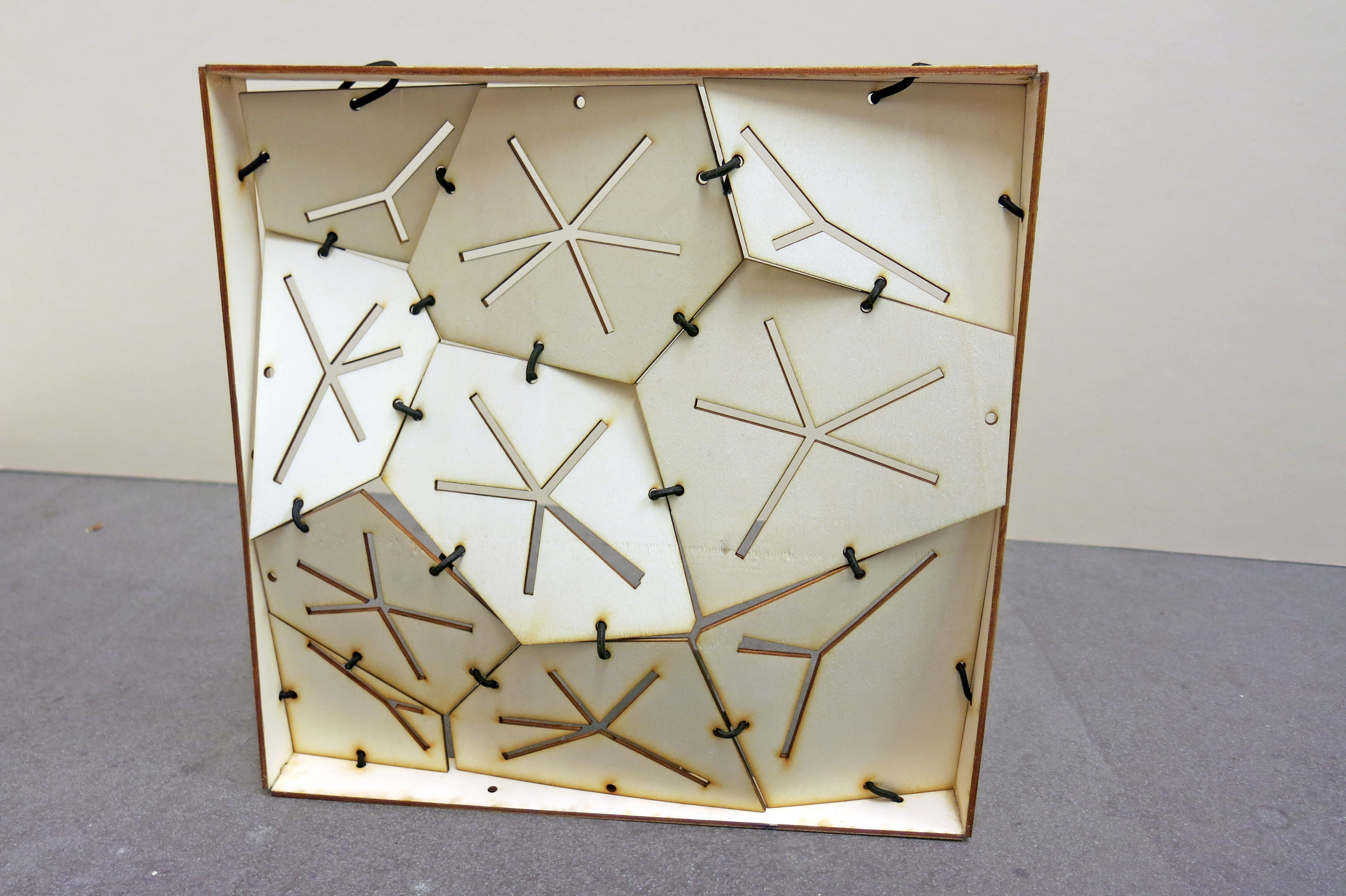