Inspired by the experiments of the group of artists and architects, Haus Rucker & Co, i.e. the ‚Mind Expander‘ from 1967, as well as the current work of progressive fashion designers such as Anuk Wipprecht, Francis Bitonti and Iris van Herpen, the students had to develop a second, additional human ‘skin’ or fashion like ‘envelop’. The concept and a first prototype should be developed on the basis of various possibilities of generative modeling and computer-based (re-) production and fabrication methods. In the same time the fashion-like design had to include dynamic, interactive elements and / or different, also technical, multimedial functions.

The main aim of the task was to design a prototype of an additional, dynamic, possibly interactive body envelope using various digital modeling, prototyping and manufacturing techniques and methods.

Femme is a sculptural costume designed for ballet. This is, on the one hand, constricting, so the dancer in a certain posture propose the amendment is forced. On the other hand, the costume offers a wide freedom of movement in the shoulder and waist area due to its large curved circles. The rigid frame stands in direct contrast to the dancer‘s necessary freedom of movement.

This game between dancing movement and captive attitude creates an expressive tension. Femme is not only to be worn as a dress suite, it can also be divided into corsage and skirt and thus also works in its individual parts. The belt is the connecting element that holds every vertical strut. The horizontally running circles hold the costume in its sculptural form. Femme can be transformed by the movement of the dancer and hereby adapts to and re-expresses the dance. 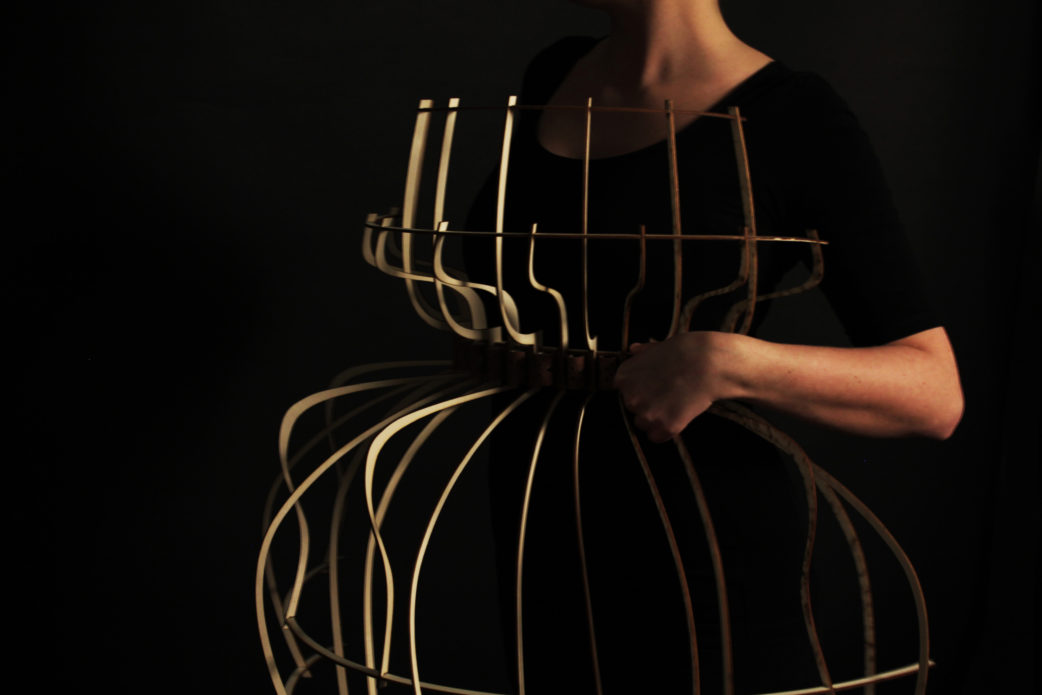 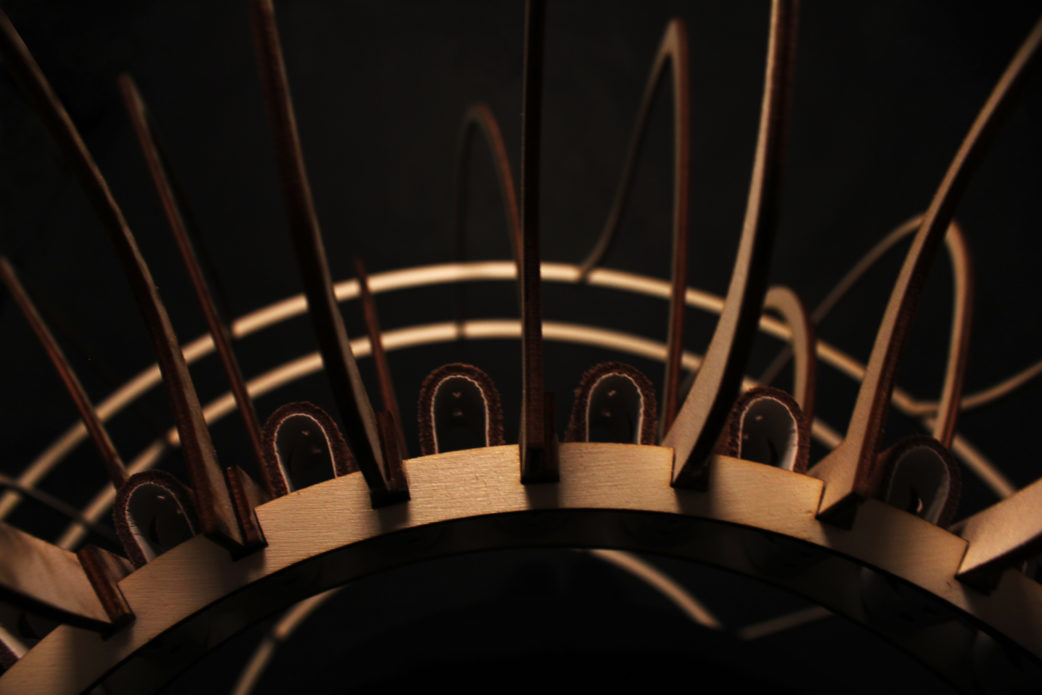 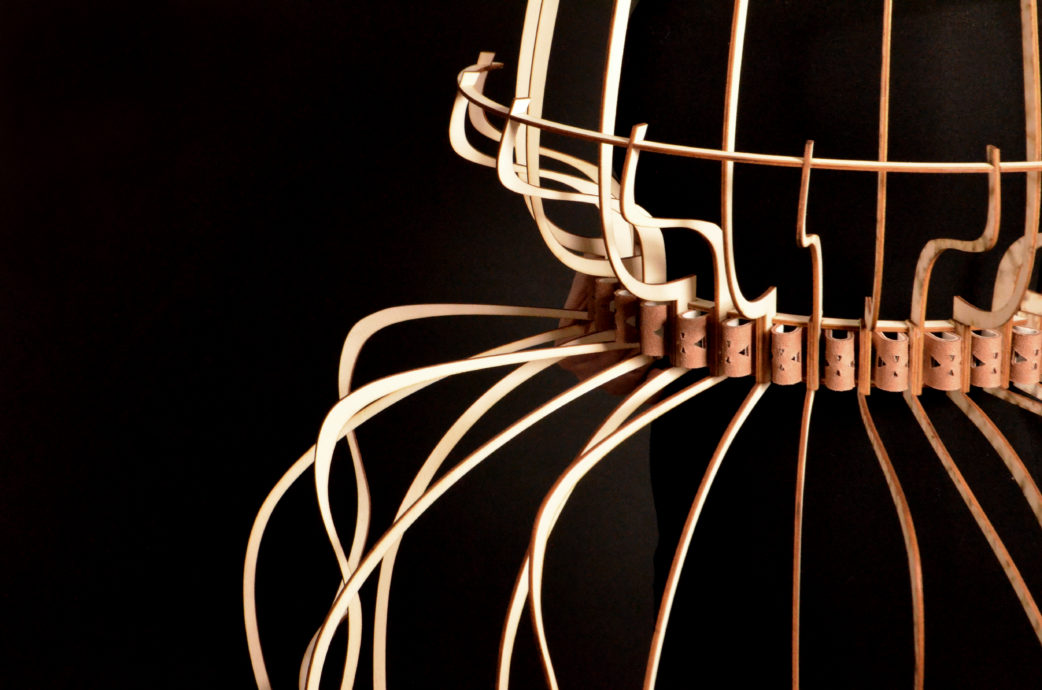 ONE AND A HALF SKIN

The skin is an interface – it separates the ‘inside’ from ‘outside’, the ‘self’ from the ‘world’. Depending on mood, feeling or depending on the opposite, the person wants to create more or less distance. This distance evolves at first through the protection, through the large surface of the skin. Body language and attitude are another stage of ‘being separated’ from the outside world. This imaginary second protective cover is made visible with the ‘Generative Skin’. It stands as the symbol for the distance of a person to the objects in his environment, to another human being or the distance he could possibly have to himself. 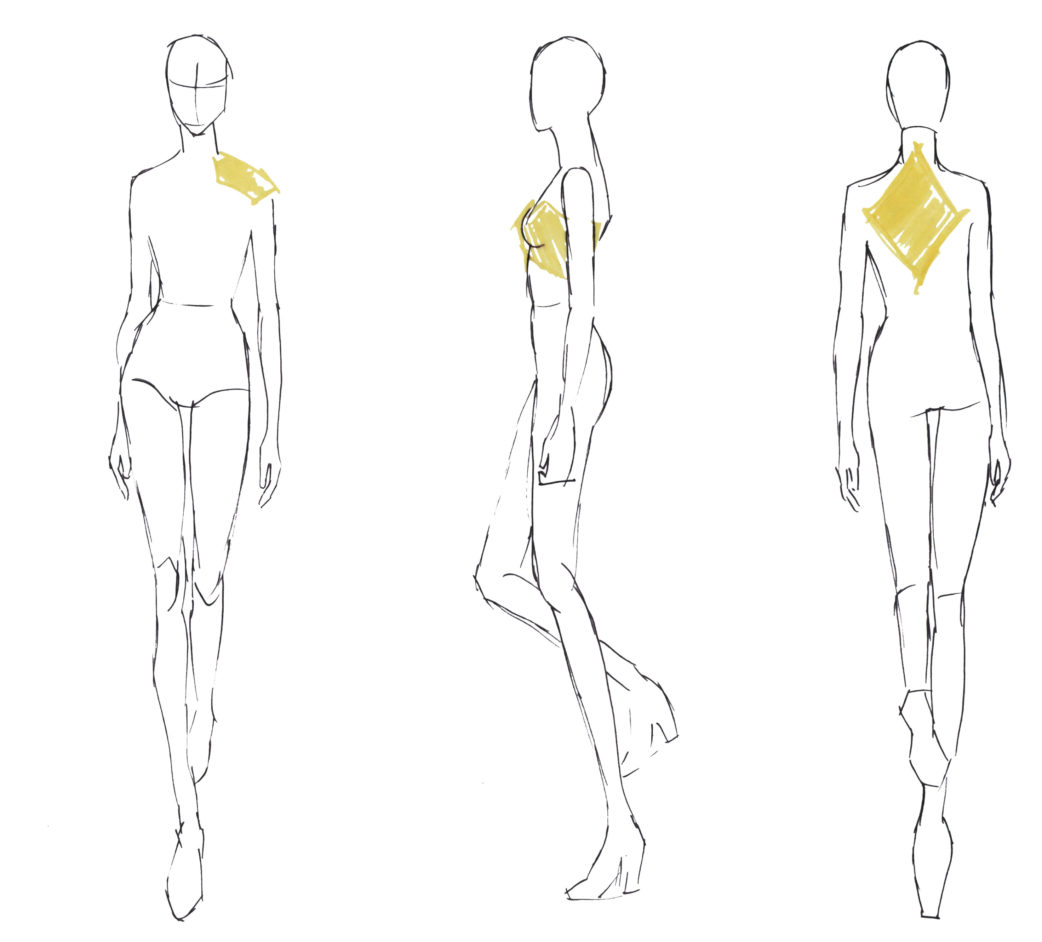 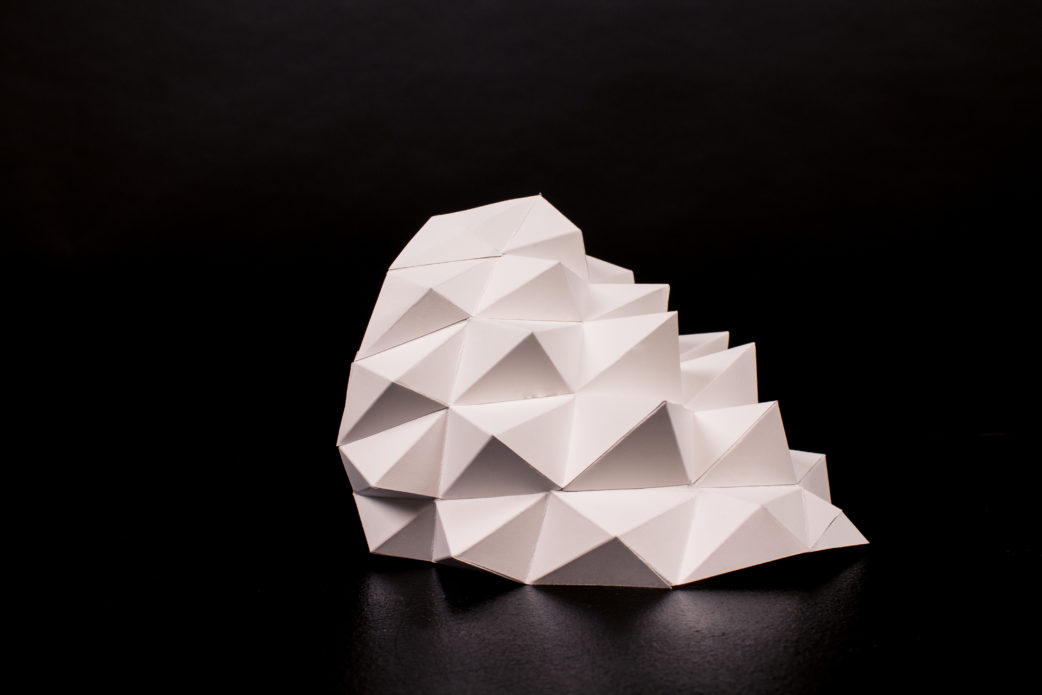 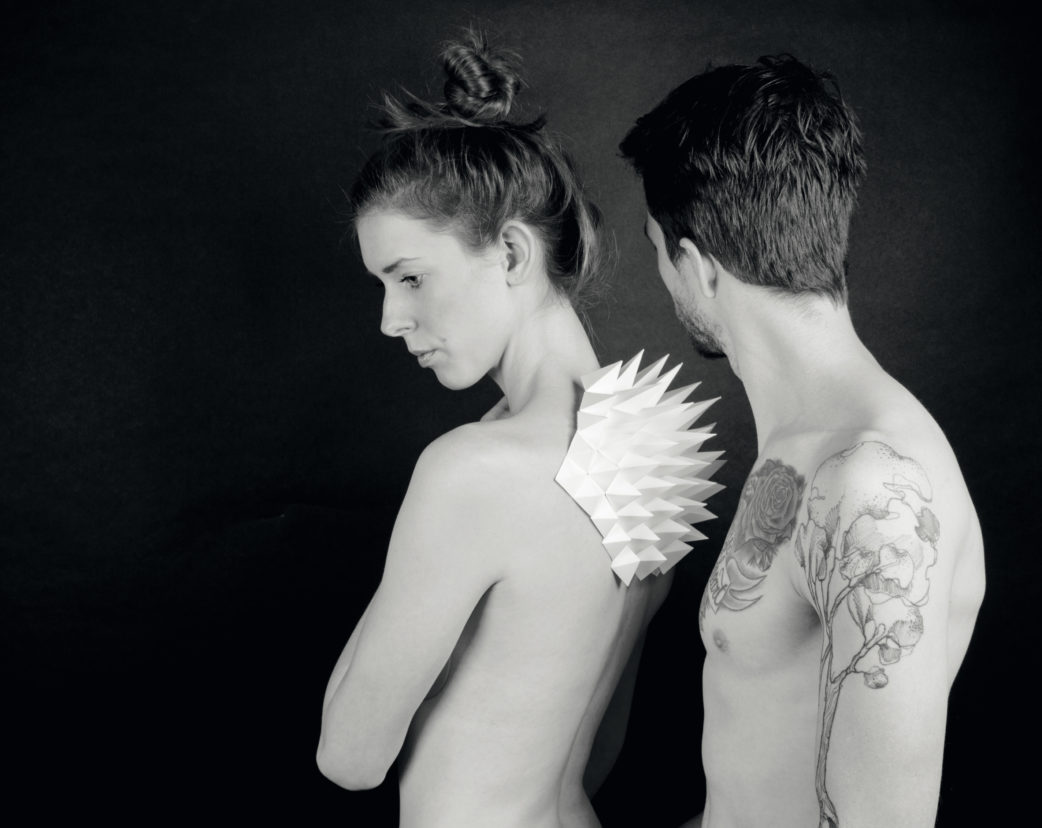 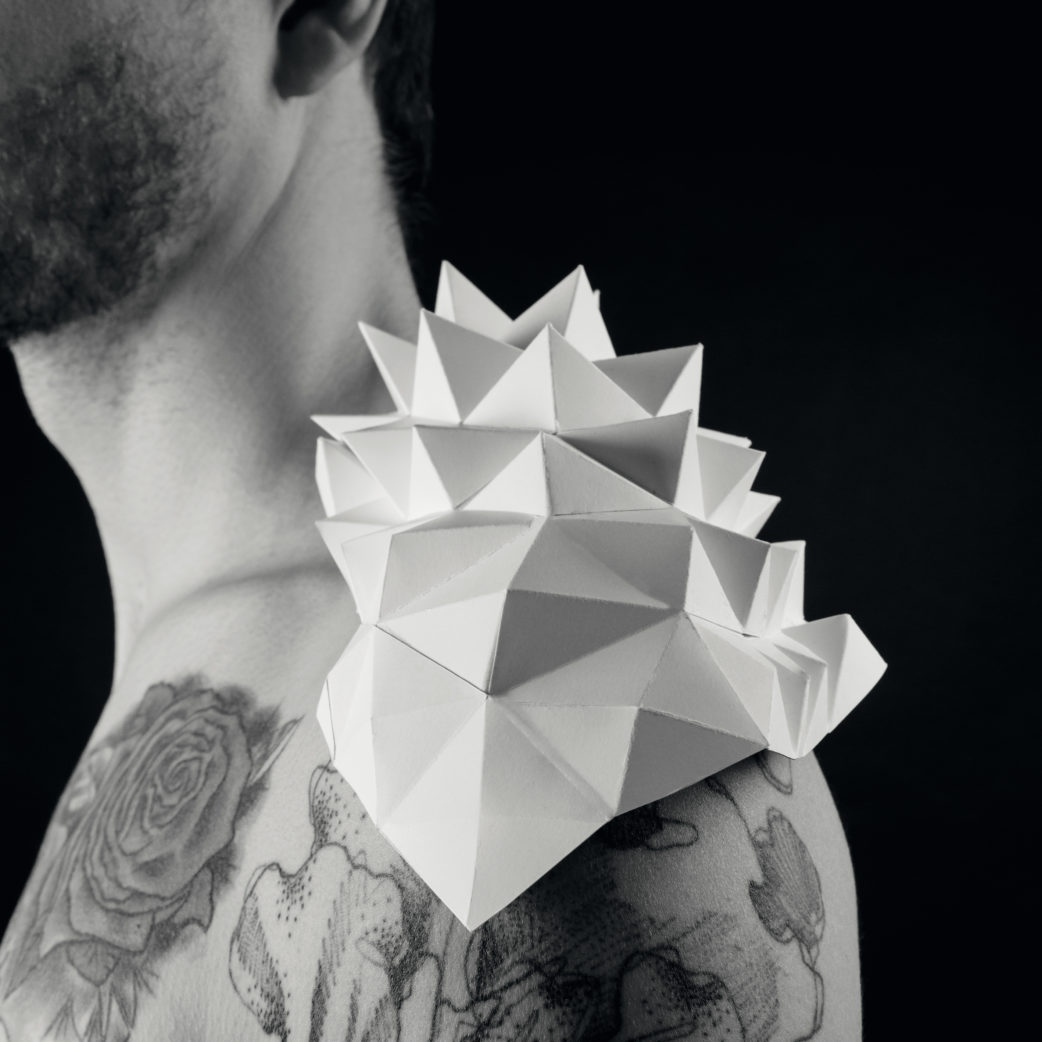 Textile materials create a flexible structure, which can be adapted to the shape of the body with the help of a wire. At the front, the woven structure is held together by circular elements made of different types of wood, which can be individually assembled and sticked together. The back shows the construction of the design. The origin idea originates from the characteristics of baroque dresses, which are multi-layered and emphasize certain body regions. 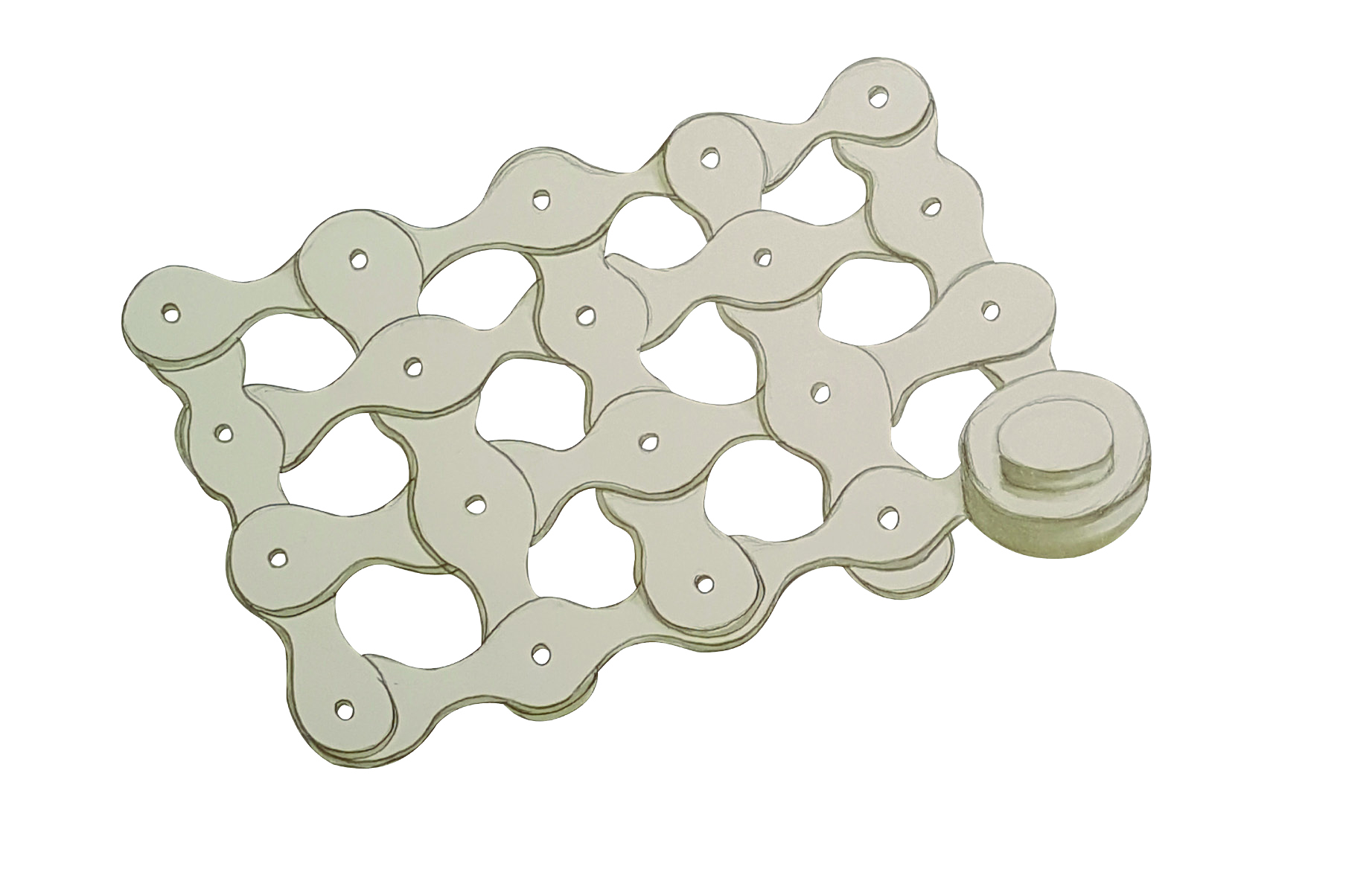 In the age of digital networking, a large part of the communication takes place in the virtual space and is only visible and accessible there. The aim of this work was to bring this communication back into the real world and make it readable for everyone. Therefore the dress „Virtual Cage“ reacts with different light pulses on personal messages and posts in social media. The structure of the dress symbolizes the invisible networking that everyone around you builds – often without being aware of it. 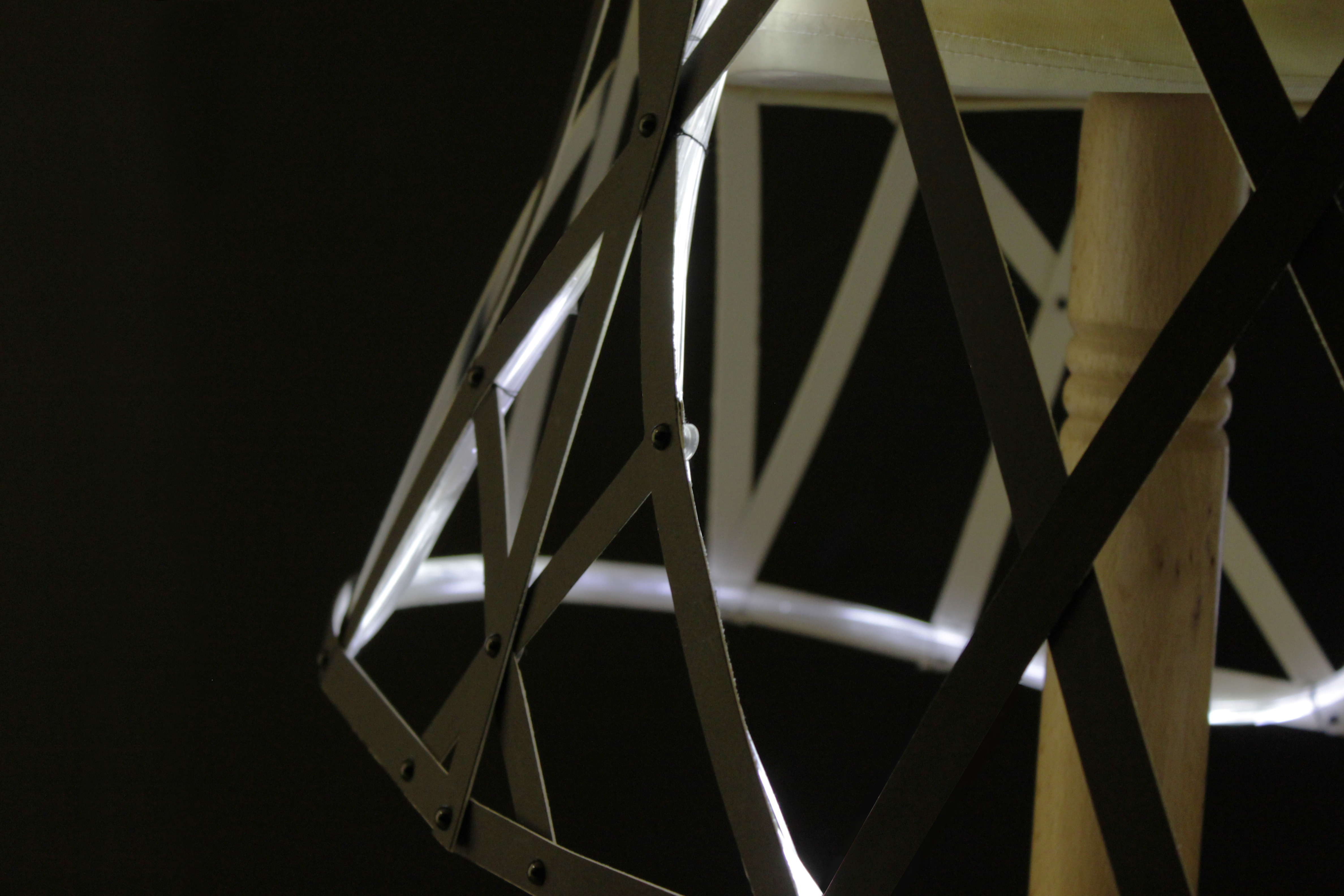 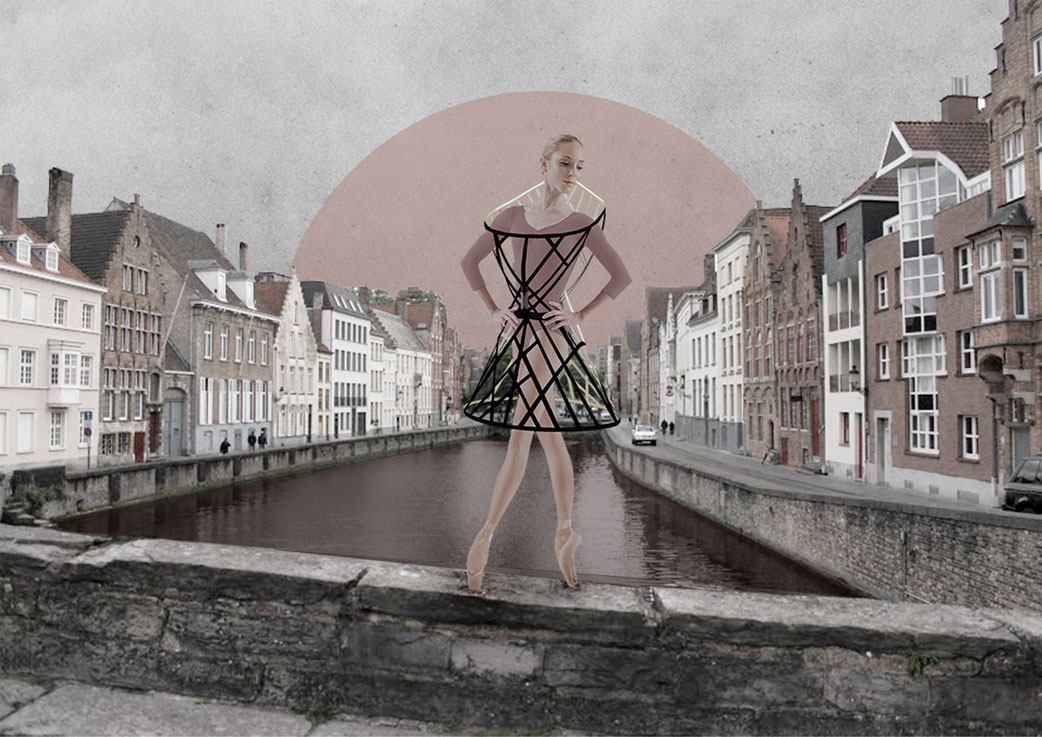 The design is a combination of two preliminary designs consisting of a spiral and a ‘Voronoi’ pattern. The resulting combination resembles the shape of a snake that winds around a body. A broken, flattened and accentuated Voronoi represents the main structure of the piece of clothing. 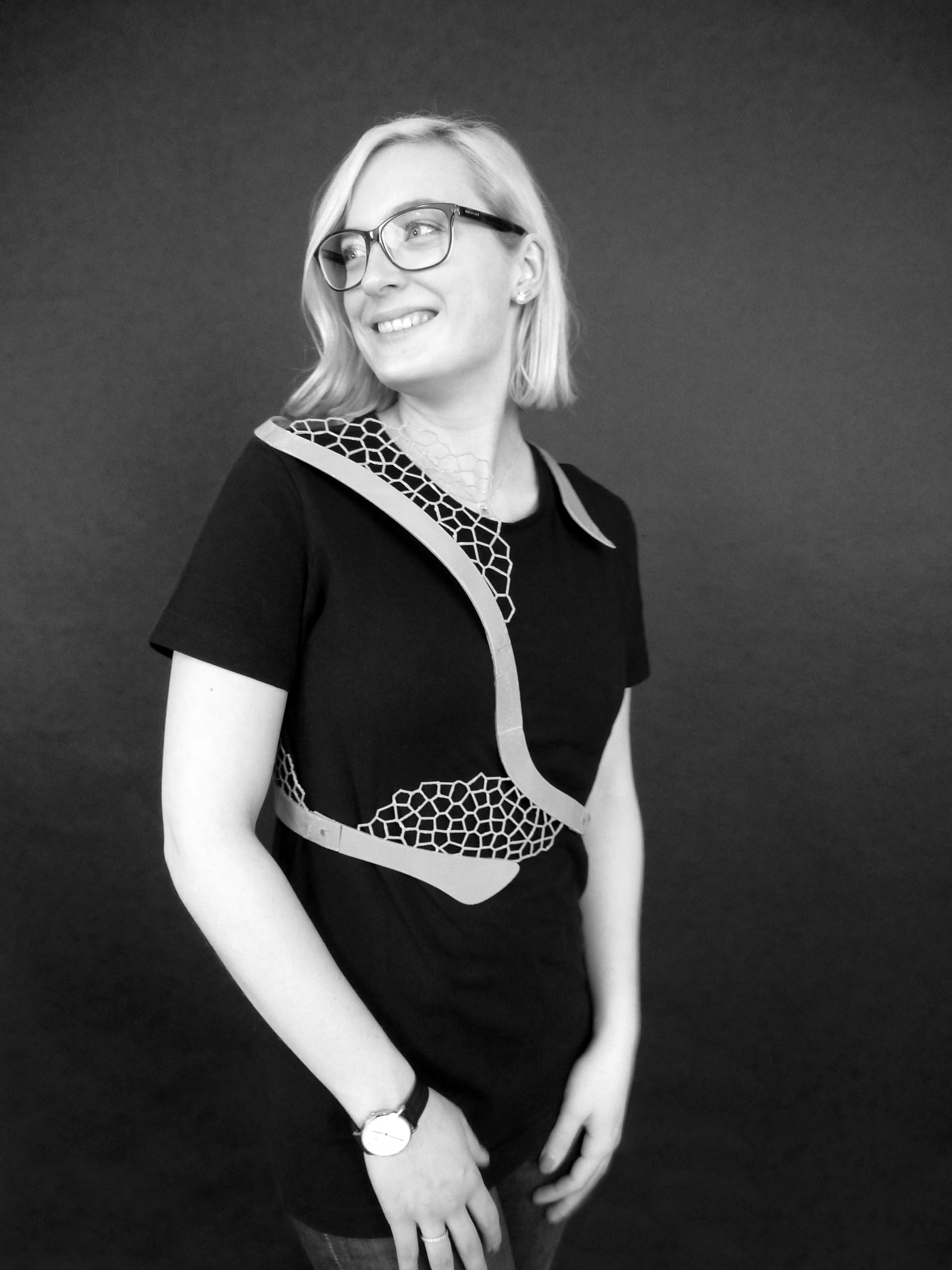 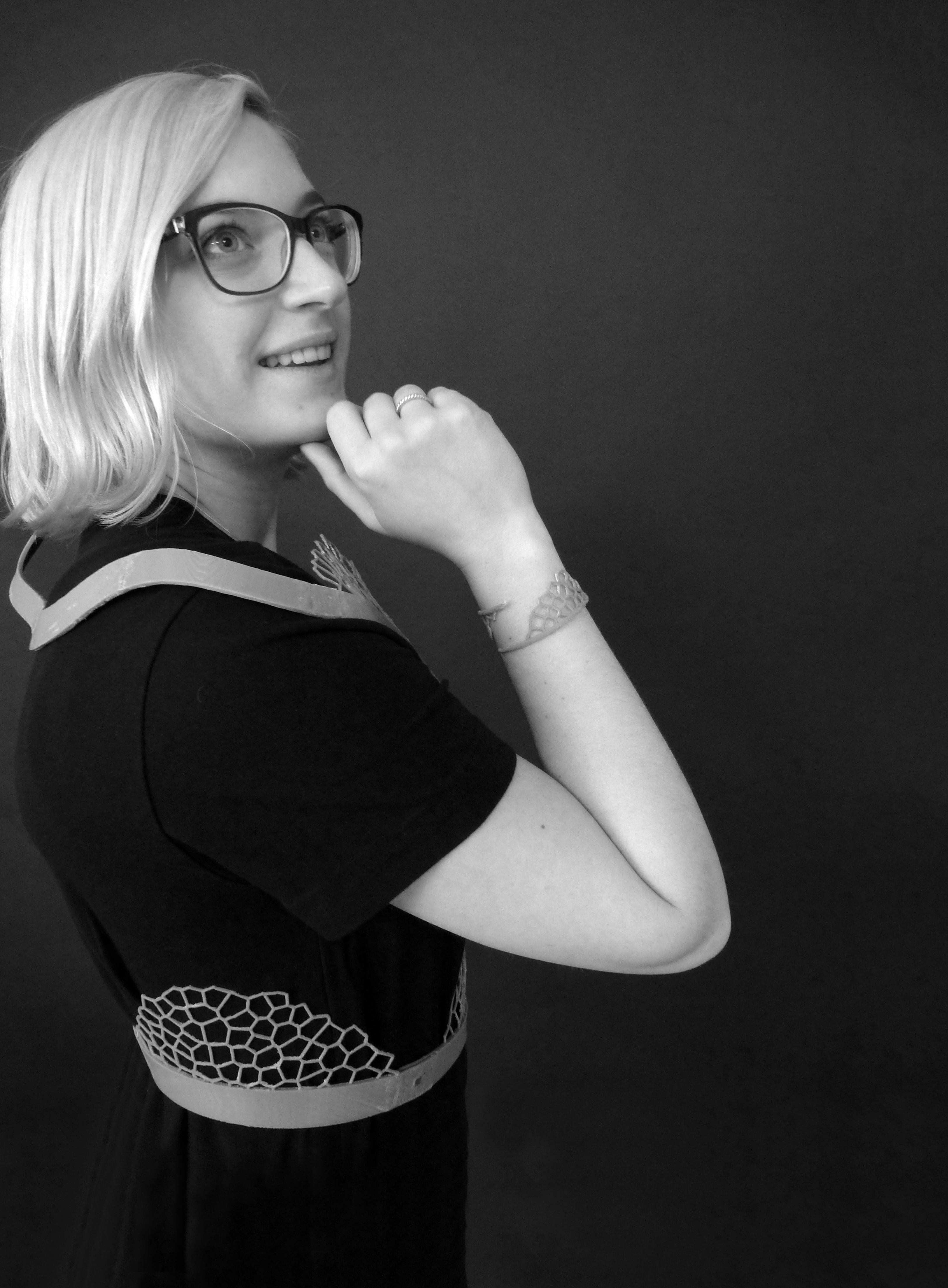 The rigid, recycled paper forms a support structure while the supple, translucent bio-plastic becomes the second skin. In the combination of the materials they benefit from the properties of the other. 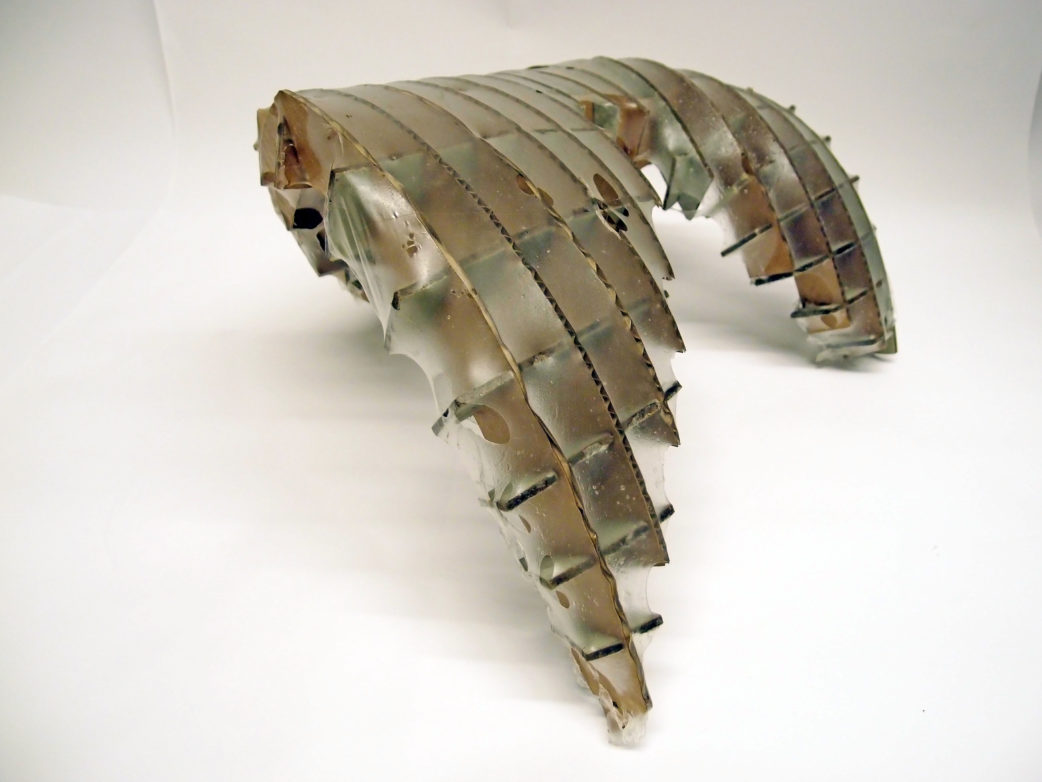 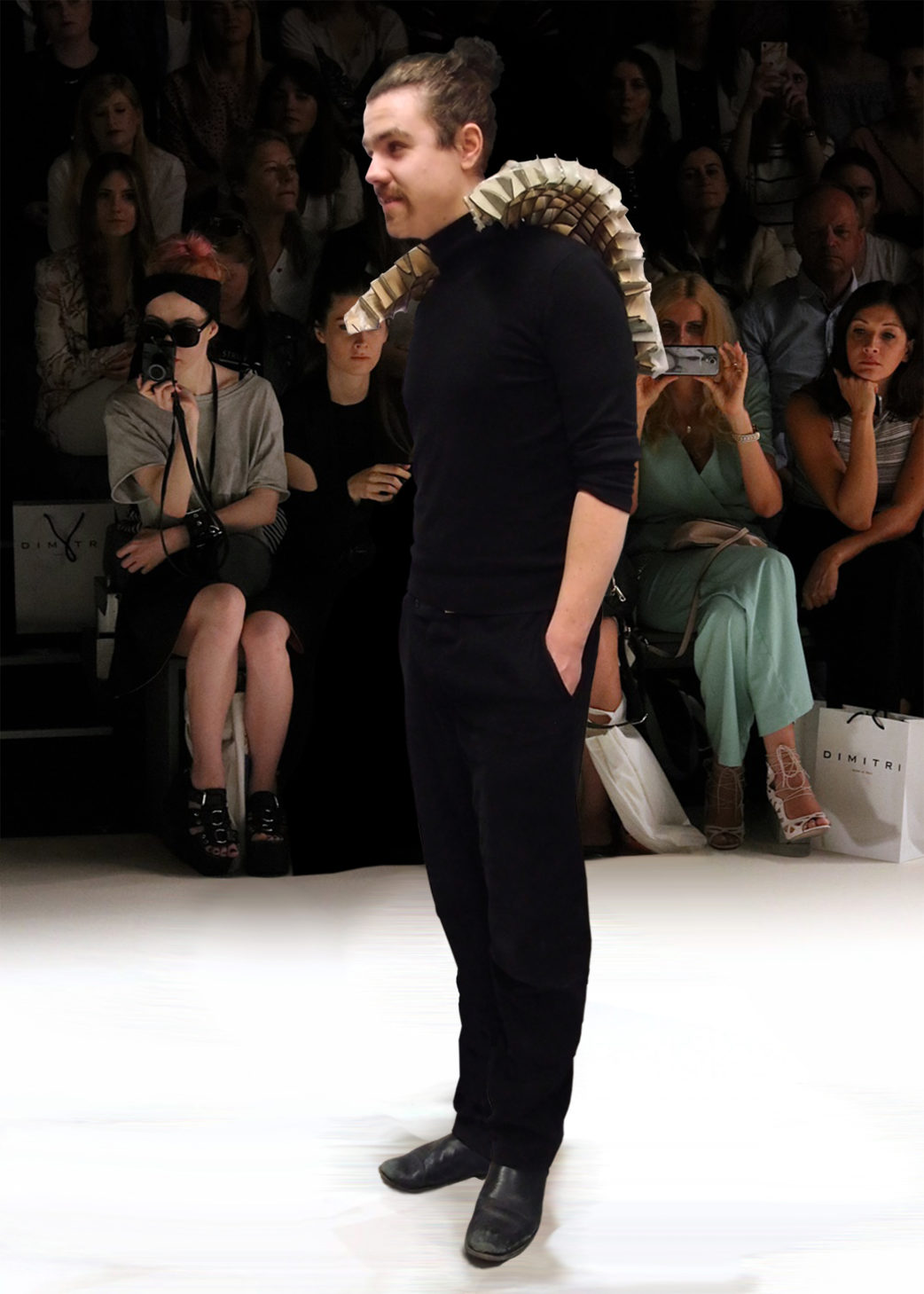 This ‘Generative Skin’ is a garment which is to be worn on the upper body. It consists of three individual elements, which are connected to one another via connector elements as well as red threads in defined locations. The asymmetrical design creates tension and a certain optical stimulus through the free surfaces. This principle creates a comfortable wearing comfort, since the individual elements can be connected to one another in a variable manner depending on the size and shape. The material is made of leather, as it can conform to the body like a second skin, but it has the necessary strength and stability to be a proper piece of clothing. 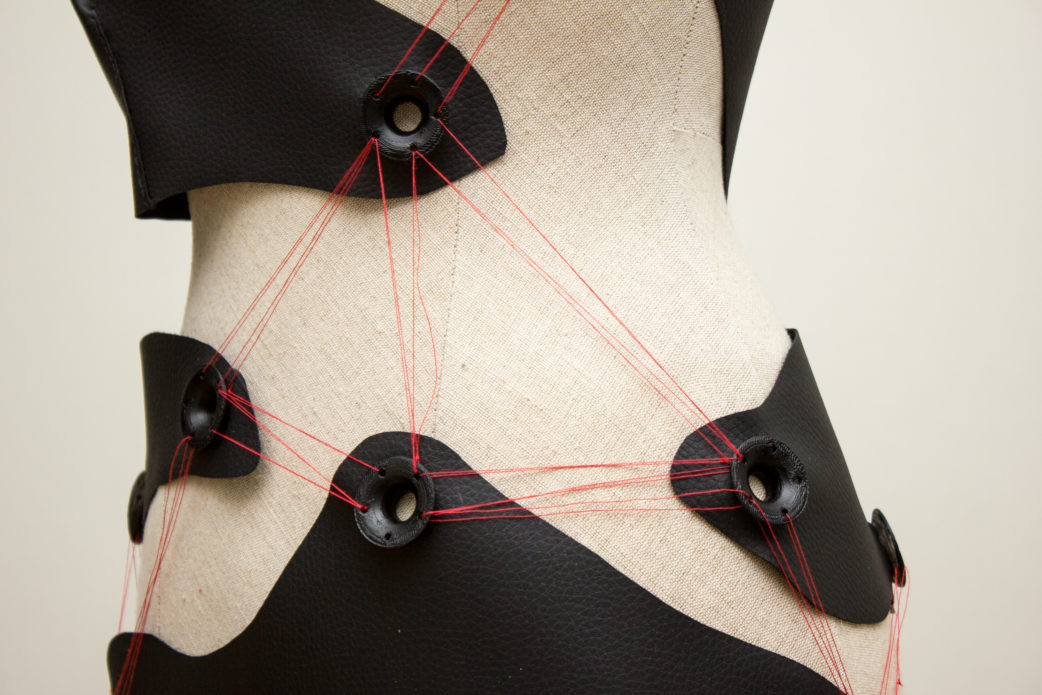 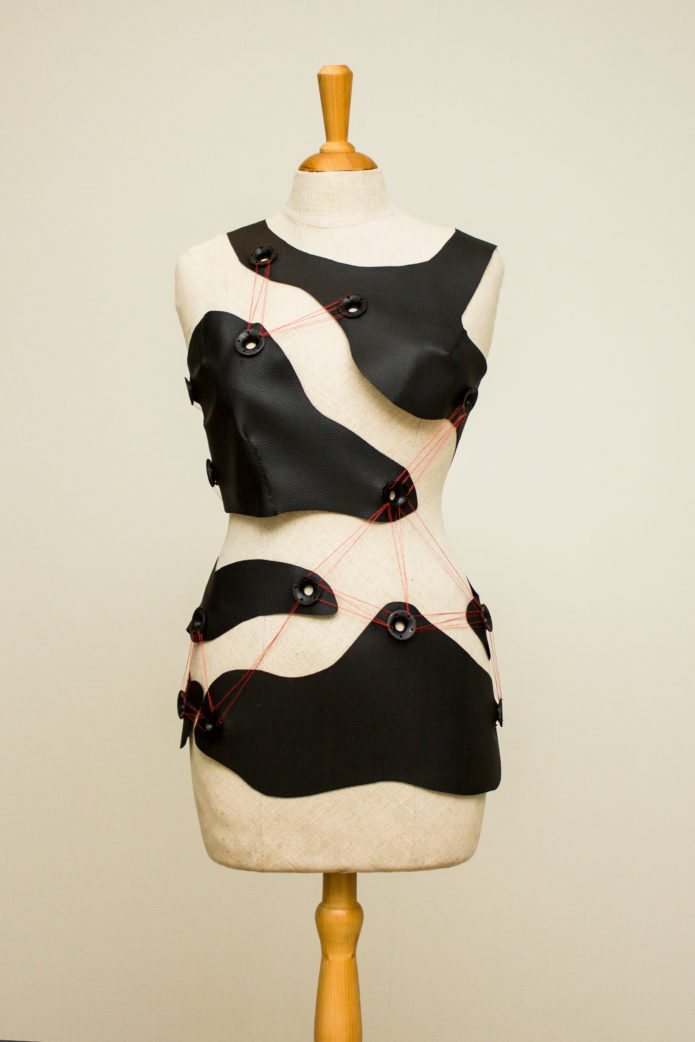