“Future of work in in the digital era” – under this topic more than 200 people came together on 22/23 November at the Schüco-Symposium in the Corporate Headquarter in Bielefeld, and specifically students, researcher, lecturers, but also representatives from industry and politics. Topics such as Artificial Intelligence, Digitalisation, Innovation or Construction 4.0. have been a subject of the discussion.

In this framework, Master students from Detmold also presented their concept for future of Lagos/Nigeria conurbation. The concept emerged during the workshop week “Working life of the future” that took place in September at the HS OWL in Detmold, and in which 65 Master students of Architecture, Interior Architecture and Civil Engineering participated. The international, interdisciplinary workshop was focusing on visions and concepts for five cities: Mumbai, Lagos, Bogota, Berlin and OWL, for the year 2050.

The students group that was having Lagos as case study was evaluated as the most successful out of 10 creative concepts. The team members: Yara Menen Fischer, Marisa Spieker, Ahmad Issa, Melanie Ramsay, Dogancan Yilmaz, Juliet Gehring und Wiebke Strathmann. The project was presented at the Schüco Symposium by the group representative Ahmad Issa with the support of Ricarda Jacobi of the HS OWL campus agency and the main organizer of the workshop week together with the Institute for Scientific Dialogue and Prof. Daniel Arztmann (also OWL University). Schüco open competition also elected the Lagos Group.

The group’s concept focuses on how the work environment and field of activity changes, when many of the residents` activities are automated by machines and drones; and how the living and working environment transforms, when a direct connection to the virtual world can be made. The students developed an organic architecture, specifically designed around the water-built slum, which is based on nodes that allow people to network and interact outside the virtual environment. “We do not know exactly what’s to come, but we can shape it,” said Arztmann concluding on working worlds of the future. 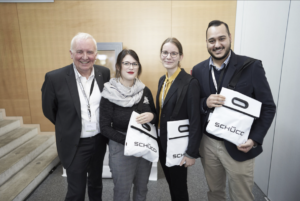