After the RMB Student Workshops in Marl (Germany, 2017) and Coimbra (Portugal, 2018), the 3rd RMB Workshop took place in Istanbul (Turkey) from 30.10.-03.11.2018. The Re-use of Modernist Buildings (RMB) project, financed by ERASMUS+, organized the workshop at ITU School of Architecture, Taskisla, aiming to investigate the topic of co-operative housing in Istanbul. 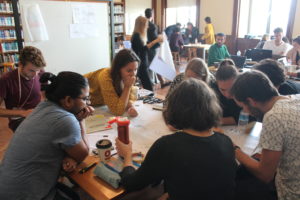 Topic: Co-operatives have emerged in the 19th Century Europe as a reaction to unfair profit and inequalities created in society due to the consequences imposed by the market economy. They are non-profit organizations with the purpose of creating a properly functioning social and economic system. Co-operative mobilization, which, in the welfare government approach, is brought about by the dominant capital’s accumulation processes, model of production. The government encouraged the housing co-operatives and land share by the laws enacted in 1948, which stimulated housing construction in Turkey. As a result, housing co-operatives have been established nationwide, primarily in Ankara, Istanbul, and Izmir from 1934 to 1956.

Two models of housing production have become prevalent. The first is the small-scale community housing co-operatives within a single unit, or under the same roof, that will later be promoted by the property ownership law. The second comprises the housing groups constructed upon lands zoned for residential occupancies by the 150-200-member housing co-operatives that constitute a significant portion of the housing production in Turkey. In these, the foundation of the co-operative is defined by the terms of payment and partnerships usually based upon workplace mobilization. The characteristics of the residents constituted the basis for the cooperative society. These characteristics such as educational level, national origin, particular interests, the age distribution of the household, and family types determined the standards of the residential living environment. 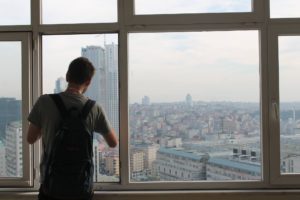 Each group, supported by tutors, discussed the housing needs and potentials of the selected case study. The specific problems stated in the workshop were: investors pressure, risk of demolishment, underrepresented heritage values, etc. Each group, according to the underlined problems, developed a specific concept for improvement of the housing area. Different strategies were tested ranging from inventories on how to list the complex as heritage, redevelopment of the latent qualities in the public space and strengthening community, till densification with new structures next to the old ones in order to cope with the ´investor´s pressure on both complexes.

The workshop was combined with a set of guest lectures from professors and practicing architects. Prof. Dr. Elvan Altan (METU) gave an intro lecture on the development of Istanbul and its Modern Architecture, and afterwards Assist. Prof. Dr. Yildiz Salman (ITU) was giving lecture on 20th Century Residential Heritage in Istanbul introducing the two case studies for the workshop. More detailed introductions of the case studies followed by Seçil Yatan (ITU) and Research Assistant Neslinur Hızlı (YTU). The afternoon lectures by Dr. Neşe Doğusan (Harvard GSD) and Assoc. Prof. Dr. Haluk Zelef (METU) were on politics and production of housing in post-war Turkey, and “Use-reuse-disuse and refuse of Modern Heritage”. The second block of guest lectures was done by two well-known architects in Turkey: Han Tümertekin (MIMARLAR) with an overview of his work and Ertuğ Uçar (TEGET) “New into Old: on the Yapı Kredi Cultural Center” a redevelopment of a Building originally planned by the German architect Paul Schmitthenner. The workshop program was followed by RMB Staff Trainings and Transnational meetings, where the members of the RMB Consortium in parallel met and discussed the latest topics and progress of the project. 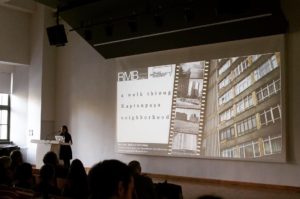 Background: The Erasmus+ project Reuse of Modernist Buildings (RMB) is a cooperative project of five Universities and one Non-governmental-organization (NGO) from Europe (Docomomo International), and one international associate partner (The Energy and Resources Institute, India). The RMB project, which is coordinated from Hochschule Ostwestfalen-Lippe side, is aiming to initiate European Master Program. The teaching program is focusing on technical, conceptual and social aspects of Modern Architecture from the post-war period; and investigates on technical and conceptual adaptation of buildings and areas, improvement of living conditions, and general acknowledgment of modernist housing areas.