On March 25th 2017, the project concept proposal for the national architecture competition ‘Santa Cruz Municipal Theater’ in Bolivia, developed by two our actual MID students Alvaro Balderrama and Onurcan Sabri Kurt has been awarded by the jury with the 1st Honorable Mention among over one hundred other projects registered in a competition at a national level.

The architectural design was in charge of the two master students of the MID program with the specialization ‘Computational Architectural Design’ of the Detmold School of Architecture and Interior Architecture (University of Applied Sciences Ostwestfalen-Lippe). For the project development they used a combination of parametric design tools and Building Information Modeling to satisfy the competition requirements and environmental goals.

Furthermore the project development has been truly interdisciplinary: The acoustic studies were made by Sebastià Vicenç Amengual Garí; doctoral candidate from Hochschule Für Musik Detmold, with the use of digital acoustical simulations to test and design desired sound conditions on each of the 1500 seats in the room. The exterior and interior visualizations were also made by master students of Hochschule Ostwestfalen-Lippe, Gesana Biti in charge of exterior views and post-production, and the interiors made by Azita Mazaheri and Sousan Roushaniboushehrian.

The Municipal Government of Santa Cruz – Bolivia released an open architecture competition for multidisciplinary teams composed by at least one national registered architect, with the objective to have a mixed used architectural project with main focus on music and performance arts.

The Project “Santa Cruz Municipal Theater” is an architectural compound dedicated to the incentive, development and diffusion of artistic expressions from the city of Santa Cruz, as well as at a regional scale.

Its composed by four cylinder blocks with different dimensions, connected by a basement level for parking lot. The open space between the cylinders is a central patio or courtyard as found on the traditional colonial architecture from the region. This double height is below a spread terrace connecting the main blocks and providing possible night events with preferential views to the city.

The main cylinder block is the Theater Hall, flexible to adapt to different performance possibilities from symphonic orchestra to opera, folkloric dance shows, among others, as required by the competition rules. This building is facing the corner over the main avenue, creating open space to serve as meeting point.

The second block is un the west corner, containing the conference room, also adaptable to be divided in smaller independent rooms for one thousand people. The conference room’s shading system can be closed to inspire concentration, or completely open providing views to urban night landscapes with the city center in the end.

The next block at the northwest part has the administrative offices, directly related to the road so users can find easy public transportation. On top of these offices a two-story library has the reading area on the first floor with access to the central patio, and a media library with music, videos, computers and friendly spaces with natural illumination to motivate research and recreation

The fourth and smallest cylinder located at the center of the site is dedicated to the restaurant area, kitchen and service area. With a terrace bar and connecting the conference rooms and the theater.

On the exterior, at the back of the site there is an open space with an exterior stage to receive over three thousand people.

The solar studies are made with digital simulations, combined with parametric design tools to create geometries and masses that respond to the context.

The design targets quality in interior spaces as well as the exteriors. That’s the reason there are several open spaces around and between the buildings, creating unexpected meetings in a passive and sociable environment.

The existing vegetation on the site is not only respected, but is emphasized in this open areas, being helpful providing shadows and fresh air. Some additional medium height plant selection from local species is located around to create paths and some high palm trees are used to provide rhythm and reginal identity.

Acoustic studies were made under DEGA (German Acoustical Society) standards and software simulations, guaranteeing appropriate geometries and materials for the interior spaces in the theater and conference rooms.

Having in mind the broad list of shows and performances that will be hosted in this building, the acoustic room is equipped with several adaptable elements that can be prepared and preset before performances. These elements include curtain systems, movable ceiling panels and the possibility of having an open or closed orchestra pit.

Three general acoustic elements configurations are proposed depending on the nature of the spectacle:

Other elements that have special attention in the design stage of the room are the orientation of reflective panels of the roof and the side walls. A series of top panels is installed with the aim of distributing evenly from early reflections from the ceiling. Between these panels and the room ceiling there is space for the installations and maintenance of electrical systems, lights and sound amplification.

The side walls and main balcony consist of multiple surfaces, ensuring a proper sound broadcasting. Additionally, larger panels are slightly sloping down, redirecting the early power from the stage into the audience. The same treatment can be applied to the walls of the side balconies.

The design elements described above have been preliminarily tested through simulations of raytracing, ensuring that the proposals of acoustic variable comply with the purpose of adapting the reverberation time. Finally, other changes apart from the proposals can be implemented using combinations of acoustic variable elements, making it possible to optimize the room for other shows such as chamber concerts and recitals of solo instruments.

The constructive system employed is a reinforced concrete structure with a metallic roof made of a white reflective surface to avoid heat island effects.

The roof slopes conduct rainwater for storage deposits and distribution to the system for sanitary systems flushing and water for landscaping.

The exterior building walls as well as the exterior solid elements like path walls or stairs, are made with the local ceramic brick, with high insulation values, and produced in an artesian way making it both economic and efficient as it has been employed for centuries in the region.

The vertical shading elements on the facades provide shadow and running air. These slats are made of white matte Alucobond sheets secured to U profiles, with LED lighting system inside that can change colors according to the interior performance or requirement, as well as the chance to take the colors form flags with the local green-white-green on special dates or other holidays. These vertical elements are engineered in a way that can be produced by the construction company with local hand, once the Alucobond material, lights and U profiles are acquired. The fabrication process simply requires cutting the flat sheets and fastening them with two U profiles in between with the light strips inside and attached to the concrete structure behind.

The project not only reflects the cultural values of the region but also local architecture, traditionally represented with white walls and the reddish brick, combined with technology and innovation in the design, assuring users and stakeholders to get the best out of this new significant landmark for the city. 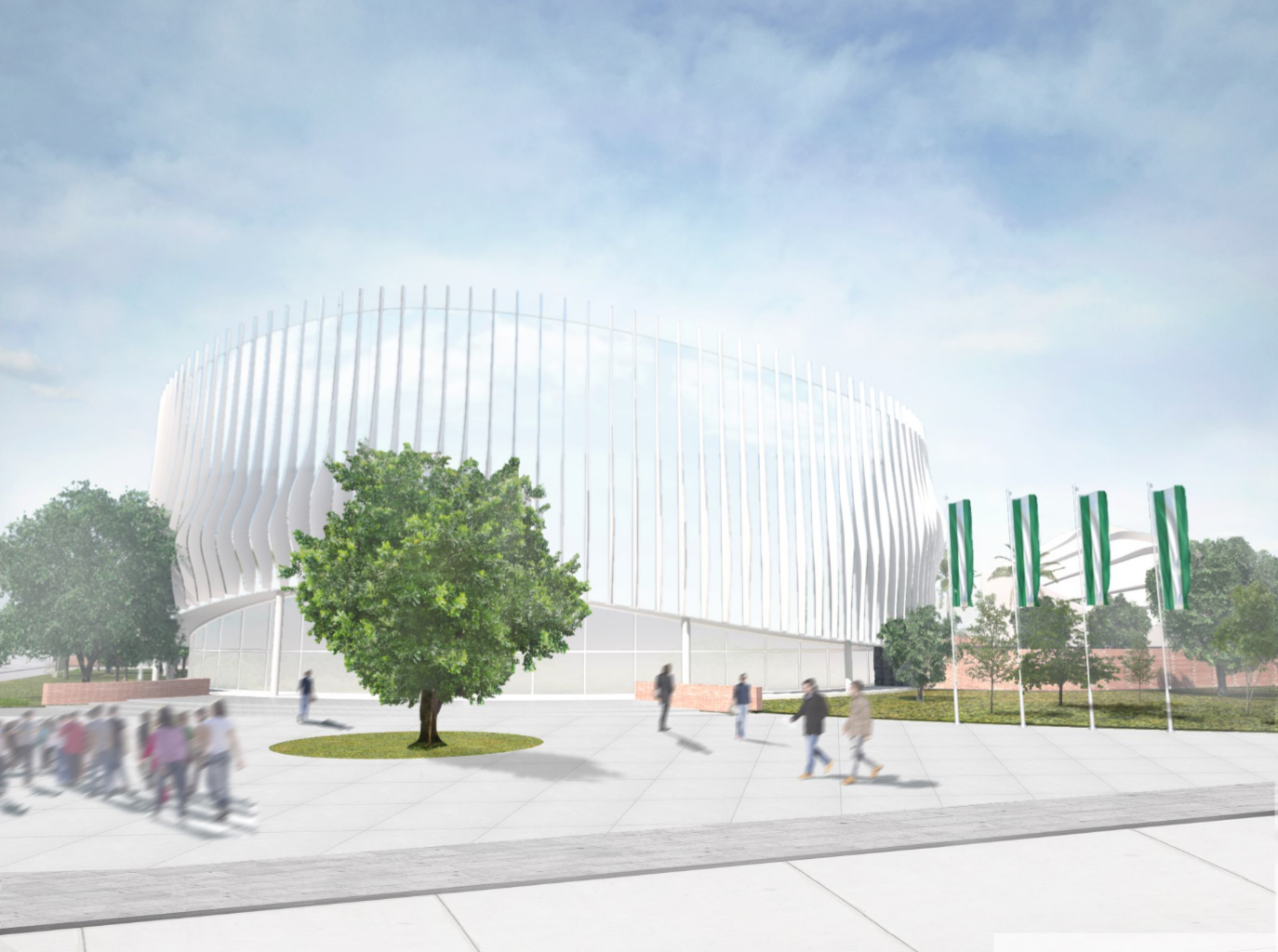 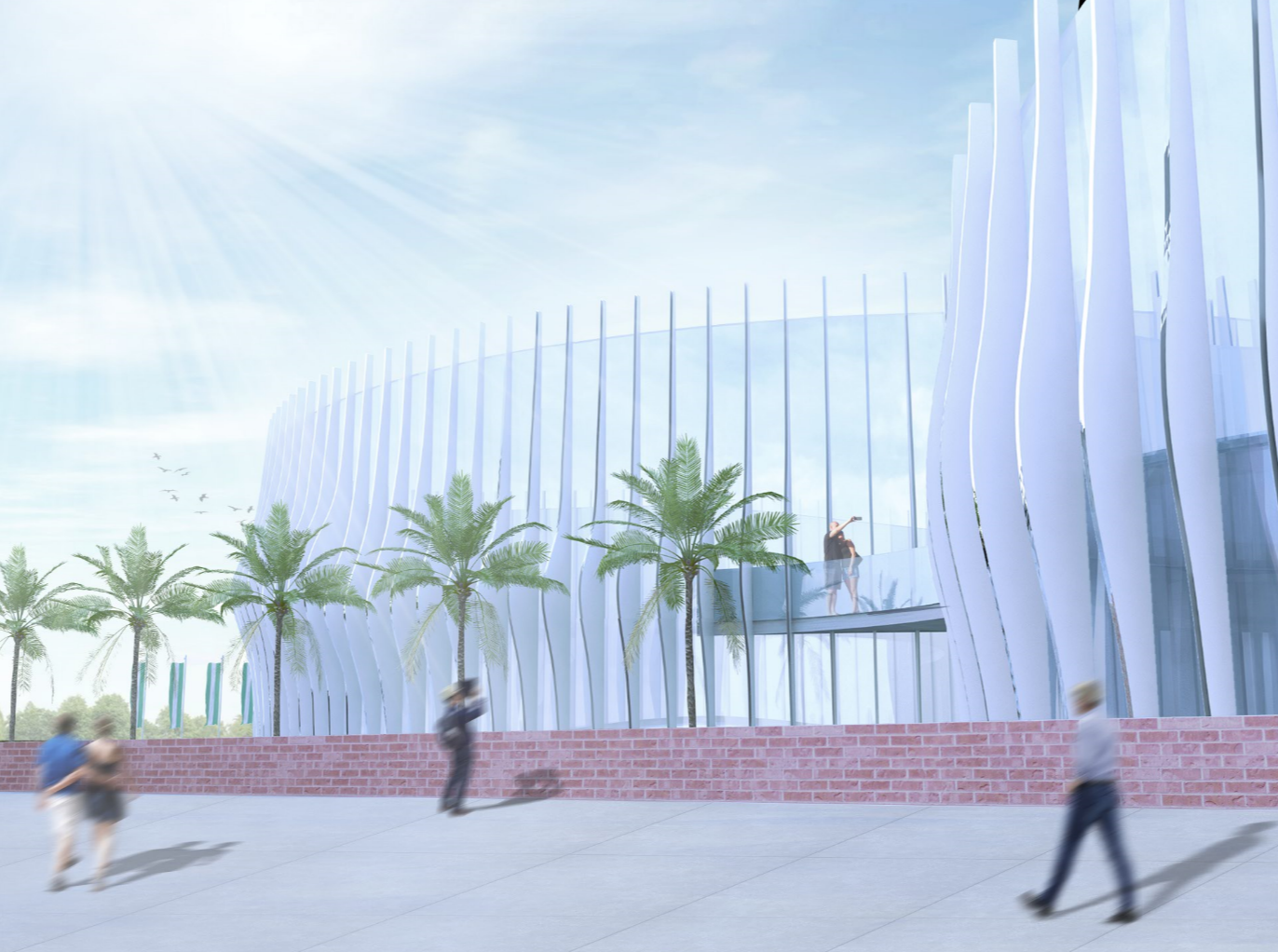